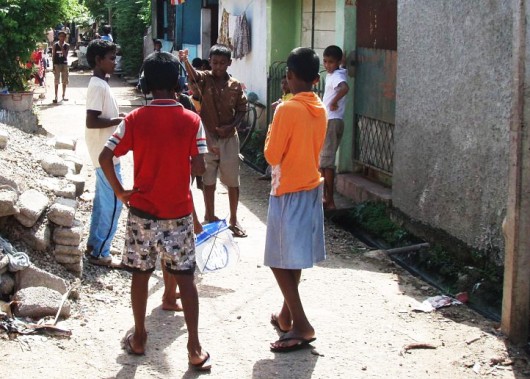 In many ways, poverty in Sri Lanka reflects its tumultuous history.

From 1983 to 2009, this South Asian country of 20 million was embroiled in a civil war pitting the rebellious Tamil Tigers against the state government. Rebel forces controlled the north and east of the island nation while the army held the center and south. Seven years after the Tigers’ defeat, poverty persists in the former rebel provinces. But progress has come steadily for the Sri Lankan people.

A recently released World Bank assessment of Sri Lankan poverty finds that less than 7 percent of Sri Lankans now live below the poverty line. This is down from 22.7 percent in 2002, 15.2 percent in 2006 and 8.9 percent in 2010. Increasing wages, urbanization and greater domestic demand for goods have contributed to the decline. As more Sri Lankans obtain jobs in industrial and service sectors, wages grow. As wages grow, so too does demand, generating more jobs.

However, this decline is not uniform across the country. Mullaltivu, Mannar and Kilinochchi districts in the north have poverty rates of 28.8 percent, 20.1 percent and 12.7 percent, respectively. The eastern district of Batticaloa has a rate of 19.4 percent while the Monaragela district has a rate of 20.8 percent. Information regarding most of these districts was limited until the early 2010s, as the war made survey collection impossible.

Men and women have also not seen uniform gains. While men have a labor force participation rate close to 80 percent, only 40 percent of women are active in the labor market. They also have an unemployment rate of 6 percent, which is twice as high as men.

Additionally, social service programs are limited in Sri Lanka, so not only do women suffer from a lack of employment, they also do not receive government assistance to get them through times of need.

A key challenge to be overcome by Sri Lanka is its low tax rates. According to World Finance, Sri Lanka has “one of the lowest tax-to-GDP rates in the world.” Investing in education, rebuilding infrastructure and redistributing societal wealth become difficult without adequate taxation. This leads to the absence of the skilled workers and roads necessary for businesses to flourish.

Still, with stability comes development and with development comes wealth. Following the cessation of hostilities, Sri Lankans were able to use their talent to diversify away from agriculture into industrial and service jobs, lifting millions out of poverty as a result. Sri Lankan leaders also recognize the need to spread the wealth, giving hope to millions more.

Most notably, Prime Minister Ranil Wickremesinghe said, “A priority for us is the creation of more jobs that will minimize poverty and provide for prosperity for ALL Sri Lankans.” He plans to do this by making the country more attractive for foreign investment. “Towards this, we need to enhance our capacity to successfully compete in global markets while creating the necessary space for investments to come in.”

Overcoming poverty is a process. It requires stability, which Sri Lanka achieved in 2009. It requires individual initiative, which the Sri Lankan people have shown in diversifying their economy.

Finally, it requires government investment in education, infrastructure, health and social services. This final piece is essential to solving Sri Lanka’s poverty puzzle — and with strong leadership and support from the global community, Sri Lankans can look forward to a brighter future.