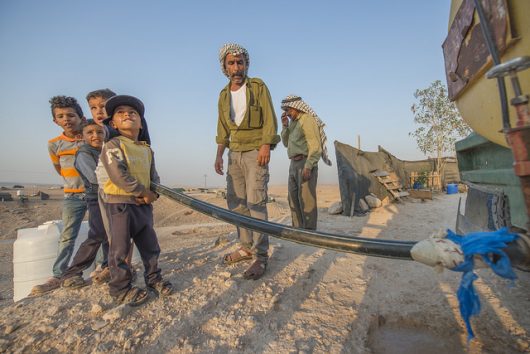 Palestine is comprised of the Gaza Strip and the West Bank, including East Jerusalem, and poverty in Palestine affects one-quarter of the 4.8 million residents. Half of the Palestinian population relies on aid for basic survival due to the ongoing conflict between Israel and Palestine.

The unemployment rate among Palestinian youth is at 56 percent, the highest in the world. Thirty-three percent of households are food insecure, with rates even higher in refugee camps, “driven by high rates of poverty resulting from unemployment, which is in part due to ongoing Israeli access and movement restrictions, as well as high prices for food and economic shocks.”

The Israeli occupation of Palestine has been called the longest-running occupation in recent history. The World Bank reports that the nature of the ongoing occupation with no end in sight and manmade barriers have isolated Palestine from the rest of the world, damaging the country’s economic development and constraining growth and investment.

A new tax plan recently unveiled by the Palestinian Cabinet is due to expand the tax liability of Palestinian citizens. In an attempt to curb the 2018 budgetary deficit, which projects an increase in expenses to exceed the increase in revenues by 11 percent, Prime Minister Rami Hamdallah met with business representatives and civil society members and agreed on “developing the tax system through tax liability by widening the base of taxpayers, attracting new taxpayers and limiting tax evasion.” These measures, which have been criticized as further burdening Palestinians, were reportedly taken in response to the threat by President Trump to halt all financial aid to the Palestinian Authority.

Residents have been dealing with poverty in Palestine for a very long time. International aid organizations have been able to somewhat address the immediate needs of Palestinian households in the aftermath of major crises. Groups like American Near East Refugee Aid and the United Nations Relief and Works Agency for Palestine Refugees in the Near East, among others, have helped ease the sufferings of Palestinian locals and refugees by providing a critical lifeline for daily survival in the form of international and humanitarian aid.

Palestinian households have also utilized coping mechanisms such as relying on friends and extended families and saving money for higher education at an early stage of a child’s life. In order to prevent a power vacuum that emboldens extremist groups or other factions to seize power, observers have encouraged Palestinian political forces to rebuild a national movement based on democratic principles. Critics, however, have noted that there can be no real democracy under an Israeli occupation.

Palestine and its people face continuing challenges to their sustainable livelihood and daily survival, in part due to the political flashpoints that have deteriorated this Middle Eastern region’s stability, economic development and prosperity. Humanitarian and foreign aid has helped alleviate the stringent conditions of local businesses and foster development. Reducing poverty in Palestine is largely dependent on a change in the political conditions of this volatile region.