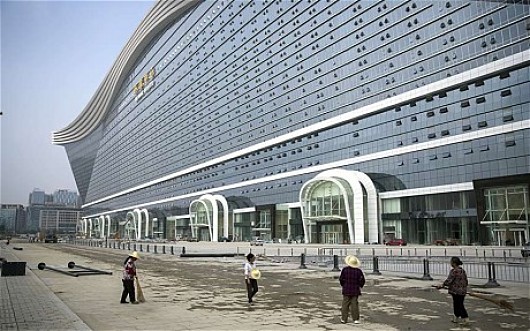 The meteoric rise of the Chinese economy has captured worldwide attention in recent years. But in the city of Chengdu, further progress is threatened by poverty and corruption.

Located in southwest China, Chengdu serves as the capital of Sichuan province. It’s an important city in the region with rapid economic growth, but poverty in Chengdu still exists.

Hundreds of Fortune 500 companies have set up local branches and the city hosts a booming technology industry. It also hosts the world’s largest building, the New Century Global Center, a megaproject which was completed in 2014. A symbol of the region’s economic progress, the hulking structure has enough space to fit 20 Sydney Opera Houses.

Like many newly prosperous cities, however, Chengdu struggles with problems associated with migrant labor and corruption.

According to SOS Children’s Villages, an NGO dedicated to protecting the rights of children, migrant workers are struggling in Chengdu. The economic growth of the city attracts many workers from the surrounding countryside. When these workers fail to find jobs, their families find themselves in trouble. They have little access to essential services because, as migrants, their rights are limited. Economic prospects are dim and many children are forced onto the streets to find work.

Corruption is another concern for residents. Chengdu made world news in 2012 when a government official, Wang Lijun, fled to the American embassy in Chengdu amid a major corruption scandal.

Construction of the enormous Global Center was also mired in controversy, leading to the arrests of dozens of local officials. Deng Hong, a billionaire behind its construction, is under investigation by the Chinese government for corruption.

After nearly 40 years of aggressive market reforms, China’s economy is now the fastest growing on earth and roughly 500 million people have been lifted out of poverty. There is no doubt that Chengdu, like many Chinese cities, has benefitted from the nation’s skyrocketing economic prospects. The breathtaking pace of China’s economic growth is well-known.

In 2014, China surpassed the United States in purchasing power parity, a measure which examines national GDP relative to the cost of living. In absolute terms, the Chinese economy is likely to overcome its American counterpart in the coming decades.

For this growth to be sustainable, however, China must contend with urban poverty and local corruption.