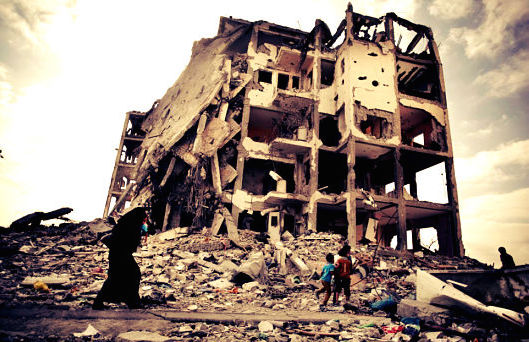 July 8 marks one year since Israel launched an offensive against the Islamist group Hamas in the Gaza Strip. The resulting 50 days of conflict left 2,200 Palestinians and 73 Israelis dead.

Now, almost a year later, life in the Gaza Strip has improved little, if at all. Over 100,000 people are still displaced. On May 21, the World Bank released a statement addressing the current situation in Gaza, which it termed, “unsustainable.”

Since Hamas took control of Gaza in 2007, the Egyptian and Israeli governments have sealed their borders with Gaza in an attempt to stop the transfer of weapons to extremist groups. However, these blockades have also severely limited the Gazan people’s access to recovery supplies.

Both the blockades and the 2014 war have shrunk Gaza’s economy by close to half a billion dollars. The World Bank reports that Gaza has been “reduced to a fraction of its estimated potential.”

With the economy essentially cut off from the outside world, the well-educated population of Gaza has nowhere to turn for jobs. Gaza now has the highest unemployment rate in the world, with an overwhelming 43 percent of residents out of work. At the end of 2014, youth unemployment surpassed 60%.

About 1.8 million Gazans are restricted to a region smaller in area than the city of Washington D.C. They cannot leave without permits, and many supplies cannot pass through the blockade.

One Gazan woman lost her five-month-old grandson to exposure in the winter following the conflict. As of Feburary, she lived in the remains of a house destroyed by the war, where she feared for herself and the rest of her family. “This house isn’t adequate. We’re scared it’s going to collapse on us,” she explained in an interview with Vice News.

After last summer’s conflict, the international community pledged $3.5 billion for recovery efforts in the Strip. A year later, little more than a quarter of that money has been dispersed.

The remaining $2.5 billion are desperately needed. Nearly 40% of Gaza’s citizens live below the poverty line. Neighborhoods still lay in ruins, and an overwhelming majority of the population lacks access to electricity and clean water. Nickolay Mladenov, UN Special Coordinator for the Middle East Peace Process, recently noted, “No human being who visits can remain untouched by the terrible devastation that one sees here in Gaza.”

The World Bank report calls for an easing of the blockade to allow reconstruction materials to reach residents. It also says that the Palestinian Authority must strengthen its leadership to rebuild a Gazan economy that is “on the verge of collapse.”

Poverty in Chengdu, ChinaMalnutrition Rates in Nepal Increase After Earthquake
Scroll to top