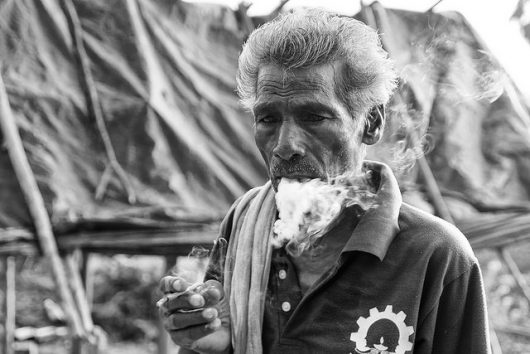 Studies have shown that poor households in low-income countries can spend an upward of 10 percent of household budgets on tobacco products. Poverty and tobacco use are a highly linked global phenomenon. This disproportionate relation has several outlining side effects.

Households with less disposable income that use tobacco have fewer means of survival when it comes to health and basic living costs. The choice to buy tobacco-based products deprives families of the income needed for proper diet and nutrition. In this respect, outside of the health risks typically associated with tobacco usage, poor diet and malnutrition are within the realm of side effects.

The World Health Organization (WHO) has also reported that tobacco leads to higher illiteracy rates when money is used on tobacco products over education. One 1997 study in Chennai, India, found this to be true. “Among illiterate men, the smoking prevalence was 64 percent, whereas it was only 21 percent among those with more than 12 years of schooling,” reports the WHO.

The vicious cycle of poverty and tobacco use is prevalent throughout the world. Due to the prevalence of poverty in certain countries, farmers will accept a line of credit from tobacco companies. This credit is set in the form of seeds, fertilizer and other essentials for growing tobacco. The problem with this business transaction is that farmers must then sell all of their product. However, the profit for selling the tobacco leaves often ends up being less than that of the line of credit, leaving the farmers indebted to the tobacco companies and continuing the cycle even further.

Luckily, in 2015 the United Nations General Assembly adopted a new plan in order to combat the socioeconomic side effects of poverty and tobacco use. The Sustainable Development Goals (SDGs) formally recognize, on a global scale, the negative impact of tobacco consumption on health, wealth and development. Under the SDGs, the WHO Framework Convention on Tobacco Control (FCTC) was set to “protect present and future generations from the devastating health, social, environmental and economic consequences of tobacco consumption and exposure to tobacco smoke.”

One key difference included in the Sustainable Development Goals is that, unlike previous implementations, the SDGs apply to all U.N. members. High-income countries, especially the United States, are no exception. Though the United States has one of the highest standards of living, poverty and tobacco use still afflict lower socioeconomic groups. The Center for Disease Control and Prevention found in 2014 that, in the population of people having only a GED certificate, smoking prevalence is more than 40 percent.

Fighting poverty is essential to the fight against tobacco use. Tobacco use is a habit that is so detrimental to human life that it should be of high focus for eradication, especially when global health is at risk.