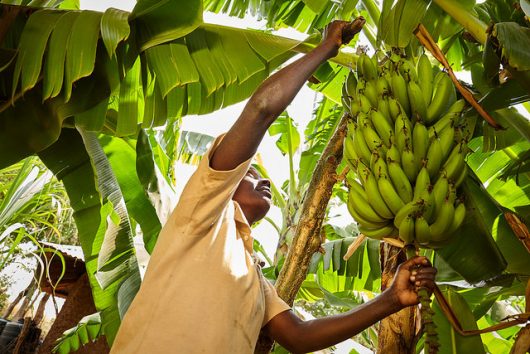 Banana farming in Zimbabwe has evolved from a subsistence crop to a commercial enterprise, transforming rural communities in the eastern part of the country.

In 2010, USAID funded the Zimbabwe Agricultural Income and Employment Development (Zim-AIED) program that worked with banana farmers in the Honde Valley in eastern Zimbabwe to improve agricultural practices, access to markets and the production of high-quality bananas.

The Food and Agriculture Organization also implemented the Mupangwa irrigation scheme in the Honde Valley to help farmers improve banana cultivation and link them to markets and other farmers in the region.

Prior to USAID intervention, banana farming in Zimbabwe was a low-income enterprise. Farmers earned less than $200 per year due to a lack of formal markets and very low harvest yields. Bananas were only grown on a small scale and sold on the roadside to middlemen that took advantage of these small-scale farmers by paying low prices only to sell them for much higher prices.

Where monthly yields used to be only 30 to 50 kilograms of bananas, individuals are now able to produce over 1,000 kilograms per month. The region has gone from producing 2,000 tons in 2011 to more than 27,000 tons in 2017, contributing more than $7.5 million to the rural economy each year.

Banana farming in Zimbabwe has been wildly successful because the trees are easy to manage. Banana trees require a humid tropical climate, good drainage and fertile soil. The Honde Valley in eastern Zimbabwe ticks all of these boxes and thus is perfect for banana farming.

By 2015, about 600 banana farmers had received technical assistance in agricultural techniques. They were able to transform their farming practices to increase their production and incomes drastically. Those farmers then passed on their knowledge to neighbors and others in their community. Now, the Honde Valley is home to more than 5,000 commercial banana farmers, each earning an average of about $4,200 per acre per year.

Banana farming in Zimbabwe has opened many other doors for rural farmers and their families. Access to credit and bank loans has increased dramatically, school enrollment has increased and local small and medium-sized businesses have sprung up in the region. Young people that had left the country in search of employment have returned to eastern Zimbabwe to take up small-scale banana farming. Half of the African population is under 25 years old, so providing decent employment opportunities is vital for the young labor force.

Commercial banana farming in Zimbabwe has also empowered women. Women constitute approximately 60 percent of banana farmers in the Honde Valley. Many of the newfound banana farmers are widows trying to make ends meet to support their families. Other women help supplement their husbands’ incomes with the profits from banana farming.

Banana farming in Zimbabwe has helped pull rural communities out of poverty, improve nutrition and food security, increase incomes and empower individuals throughout the Honde Valley.