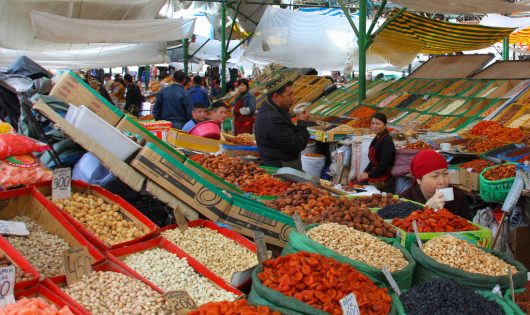 Kyrgyzstan is a small, mountainous country, landlocked amongst countries that spent most of the 20th century under Soviet rule. Hunger in Kyrgyzstan is an issue that overshadows the progress the country is making.

Two-thirds of Kyrgyzstan’s population lives in the countryside where agriculture is the main source of income. The fragmentation of the small family farms, however, inhibits overall production from reaching the scale necessary to meet the market demand.

Farmer-to-Farmer is a five-year program introduced in 2013 by USAID designed to bring technology transfer innovations to Kyrgyzstan’s agricultural sector through short-term technical assistance. The goal of the USAID program is to generate economic growth with person-to-person assignments. The farmers of Kyrgyzstan learn such things as new pruning techniques, ways to improve cold storage management or food safety standards. The volunteers who arrive in Kyrgyzstan gain a better understanding of U.S. foreign assistance outside their country.

A bright spot in Kyrgyzstan is its 99 percent literacy rate and the fact that gross primary school participation is 100 percent. One way to conquer hunger in Kyrgyzstan, as well as childhood malnutrition, is to improve school meals. The U.N. World Food Programme funded a pilot project called School Meals Optimization, which provides culinary training and kitchen equipment to schools. It also aids in renovating school cafeterias and helps schools establish vegetable gardens to source their fruit and vegetables. By 2015, more than 62,000 primary school students in 260 schools received a nutritious, hot meal during the school day, almost six times the number of students in the project’s first year. The program has since expanded to all schools across the country.

The focus on healthy, nutritious meals is gaining momentum in this former Soviet satellite. Recently, 20 school chefs from across the country were chosen to meet in Kyrgyzstan’s capital, Bishkek, for a competition and a master class with one of Kyrgyzstan’s top chefs. They spent one day cooking vegetables, pureeing soups and making chicken fricassee among other things, all using affordable local produce. On day two, all 20 chefs competed to make a three-course meal in 90 minutes using ingredients from a mystery basket. These competing chefs can attack the issue of hunger in Kyrgyzstan in a positive and productive manner.

The students of Kyrgyzstan also emulate the healthy, nutritious meals they enjoy when they graduate from the classroom into society. They are building a foundation to help decrease hunger in Kyrgyzstan for future generations. Through their efforts, the future for Kyrgyzstan’s food security looks bright.

A Resolution to the Quality of Water in Sri LankaPollution in India: The Switch to Electric Cars
Scroll to top