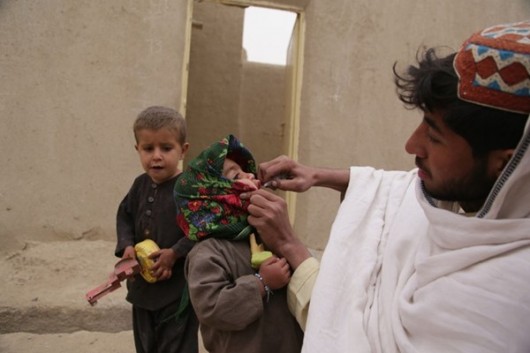 On Sept. 30, 2015, the Minister of Public Health of Afghanistan, Dr. Ferozuddin Feroz, officially introduced the Inactive Polio Vaccine (IPV) into the vaccination program for all children under the age of 1 in Afghanistan. The vaccine is now available, free of charge, at health facilities across the country.

There were 12 reported cases of polio in Afghanistan in 2015. Afghanistan is one of three countries in the world which are still labeled “polio endemic” by the World Health Organization (WHO). The goal of this new vaccine is to enable polio eradication in Afghanistan.

The IPV, coupled with the Oral Polio Vaccine (OPV), which is already in the routine immunization schedule, boosts the immunity of children against polio and prevents polio transmission. IPV provides immunity to all three types of polio viruses.

Dr. Richard Peeperkorn, World Health Organization country representative, stated, “The introduction of IPV is a crucial step towards securing a polio-free Afghanistan and protecting the health of children.”

“Provision of the IPV vaccine is a key step to protect children from polio, and this should be supported by an ongoing effort to make parents and caregivers of children aware of the importance of IPV and all other vaccines,” said Akhil Lyer, UNICEF representative in Afghanistan.

The introduction of IPV would eventually require the removal of OPV once polio transmission has been interrupted in order to sustain a polio-free environment. However, since polio in Afghanistan is still prevalent, it is suggested that Afghans accept OPV and IPV when offered.

The US Struggles to Meet SDGsWhere Could Your Foreign Aid Dollars Go?
Scroll to top