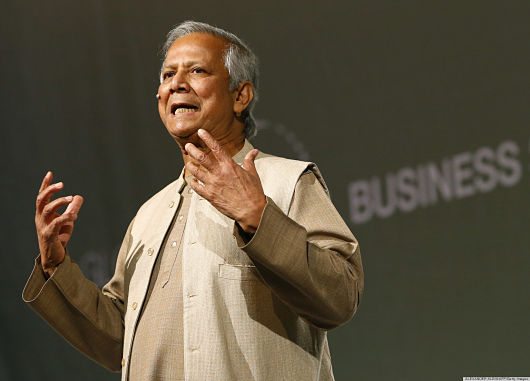 Try to buy a house without a mortgage loan or start a business without a business loan. For most of the world’s population, even in developed countries, these tasked are difficult. In the developing world, where financial services are virtually nonexistent for millions of the poor, opportunity is a myth and breaking an endless cycle of poverty seems hopeless.

Bangladesh celebrated one of its own as Muhammed Yunus turned 75 years old on June 28th. Often thought of as the pioneer of the modern micro finance concept, Muhammed Yunus has, for decades, been an advocate for social business practices and alleviating global poverty.

Mohammed Yunus was born in Bangladesh India and is a social entrepreneur, banker, economist and civil society leader who was awarded the Nobel Peace Prize in 2006 for founding the Grameen Bank.

The Grameen Bank is a microfinance organization and community development bank founded in Bangladesh that makes small loans known as micro-credit or “grameencredit”, without collateral requirements to impoverished entrepreneurs.

The Oxford dictionary defines micro-finance or micro-credit as the lending of small amounts of money at low interest to new businesses in the developing world.

During his tenure as a professor of economics at Chittagong University in the 1970s, Muhammed began experimenting with providing small loans to women in the tiny village of Jobra. Today, the World Bank estimates approximately 160 million people in developing nations are using micro-finance.

Yunus Social Business, an organization co-founded and chaired by Muhammed Yunus, calls itself a company created with the sole purpose of solving a social problem in a financially self-sustainable way.

Muhammed Yunus, with the success of the Grameen Bank and his concept of social business, among many other accomplishments, has won 112 international awards, received 55 doctorate degrees from 20 universities, was ranked by Time Magazine as one of the top 100 public intellectuals of the world and has authored internationally acclaimed books, published and translated into numerous languages.

Today Muhammed Yunus, as he reaches age 75, is celebrated all over the world and is still very much involved in the mission to fight global poverty. Recently, Yunus Social Business (YSB) launched its first social business accelerator in Uganda, a land locked country in East Africa, haunted by conflicts resulting in millions of deaths and plagued with child slavery. With the implementation of the program, Yunus Social Business hopes to address social and environmental problems in Uganda in a financially sustainable manner by promoting and empowering social businesses through the provision of business development services, impact investment funds and related technical support.

Uganda, an impoverished nation and an area of operation for the Lord’s Resistance Army (LRA), a rebel group listed by the U.S. as a terrorist organization, could benefit from the Yunus Social Business model and possibly emerge from a society torn by war.

Through the implementation of micro-finance and the ideology of social business, societies around the world, mired for centuries in poverty could become self-sustainable and thanks, in part to Muhammed Yunus, more could lead rich fulfilling lives.

2016: Will Wi-Fi Make Its Mark as a Basic Human Right?A Look at Poverty in Norway
Scroll to top