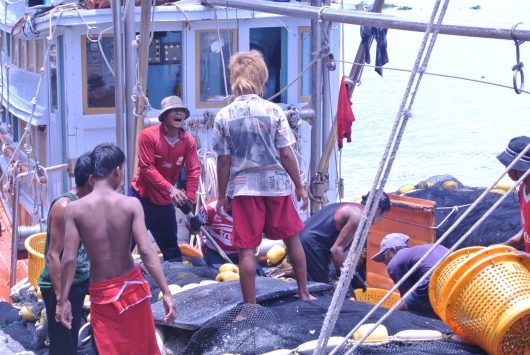 In 2016, the Global Slavery Index estimated that 425,500 people, equivalent to 0.63 percent of Thailand’s total population, currently live in conditions of modern slavery.

The most prevalent of these forms is forced labor, specifically within Thailand’s fishing industry. Human trafficking for forced labor in the Thai fishing industry enslaves not only men and women, but also children from the Greater Mekong Subregion. In the U.S., this $7 billion industry forces those enslaved to endure brutal treatment including severe and frequent physical abuse, threats of abuse, excessive and inhumane working hours, sleep and food deprivation, forced use of methamphetamines and lengthy, confined trips at sea.

After media exposés in 2014 and 2015 that showed human trafficking and brutalizations of fishers on Thai fishing boats, the country received a “yellow card” warning from abroad; this means that the nation could face a ban on seafood export to the European Union. Following the EU’s actions, the United States placed Thailand on the Tier 2 Watch List in its 2017 Trafficking in Persons report, a ranking given to governments who do not fully meet the minimum standards for trafficking elimination.

In response, the Thai government removed antiquated fishing laws and issued a new ordinance to regulate the fishing industry. It further extended the application of the key provisions of labor law regulating wages and conditions of work to fishing vessels and established in law some International Labour Organization treaty provisions through the adoption of the 201 Ministerial Regulation concerning Labour Protection in Sea Fishery Work.

These efforts led to the requirement of legal documentation and accounting on crew lists of migrant fishers as boats departed and returned to port, which aimed to help end some of the worst abuses. Thailand also created the system of “port-in, port-out” which demands that boats report for inspections as they depart and return to port. The system also established procedures for inspection of fishing vessels at sea.

Other reforms have been enacted in the industry in the wake of two reports by the International Labor Organization in 2013, and the Environmental Justice Foundation in 2014. These reports led to responses by the Thai government to introduce registration documents, also known as pink cards, for migrant workers on board. The government also instituted practices to inspect ships’ crews when leaving and returning to port. Along with vessel monitoring systems, other measures have led to important improvements for fishers, including limiting time at sea to 30 days.

The report also asserts that even amongst Thai government’s pronouncements to rein in human rights abuses, the instances still remain widespread; as a result, joint efforts need to be made. Although the U.S. and EU have taken steps to punish the Thai government for abusive practices, “The EU and U.S. urgently need to increase pressure on Thailand to protect the rights, health and safety of fishers.”

Challenges still remain. Overfishing in the Gulf of Thailand and Andaman Sea has forced fishing vessels to operate at greater distances from shore, traveling at times along the coastlines of Indonesia and other neighboring countries. This has led monitoring difficulties both jurisdictionally and practically. This problem is only intensified by poor registration and licensing of fishing vessels — many operate under layers of false documentation. Furthermore, the government’s system of pink card ties the fishers’ “legal status to specific locations and employers whose permission they need to change jobs, creating an environment ripe for abuse.”

Despite these obstacles, progress has been made. Thailand’s Ministry of Foreign Affairs defended the country’s progress thus far by stating, “The Government has implemented various legal reforms, policies, and strengthened law enforcement on labour protection as well as engaged closely with the private sector, non-governmental organizations and neighboring countries. As a result, there has been significant improvement in the labour situation in the fishing industry in many areas.”

Progress thus far has shown that there is hope for reform and change in Thai’s fishing industry. Through the help of international players, modern day slavery in Thailand can be defeated.