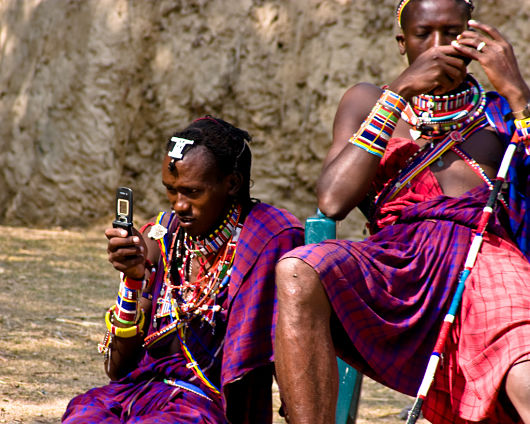 Mobile technology has been shown to have a tremendous effect in helping alleviate global poverty. Over six billion of the approximately seven billion people in the world have access to mobile phones, as shown in a 2014 UNESCO report. By 2016, it is estimated that there will be one billion mobile phones in Africa. Such widespread access opens up a window of opportunity to utilize mobile technology as an instrument in improving the lives of users in developing countries.

“Poverty is almost equated with isolation in many places of the world,” he said, as quoted in a CNN article. “Poverty results from the lack of access to markets, to emergency health services, access to education, the ability to take advantage of government services and so on. What the mobile phone — and more generally IT technology — is ending is that kind of isolation in all its different varieties.”

From the educational sphere to the economy, access to mobile technology has already significantly improved the lives of many across various aspects of life.

Literacy and education
Where there are no books, there are still mobile phones. Utilizing mobile technology is one of the easiest ways to increase literacy rates simply because phones are already in the hands of members of developing nations. Mobile reading provides a much cheaper and more convenient alternative to reading from books. While cell phones cannot teach users how to read, they are shown to significantly increase literacy retention rates. Several mobile applications and programs exist to increase access to mobile reading in the developing world. Programs such as MobiLiteracy Uganda provide parents with daily reading activities to complete with their children via audio SMS so that illiterate parents can still work to improve their children’s literacy. It is not necessary for users to own smartphones because even the cheapest mobile models allow access to mobile reading.

Agriculture
Mobile technology has completely transformed the lives of farmers in developing nations, as it allows them access to market prices without the timely concession of long-distance traveling to faraway markets. Additionally, access to weather information can help farmers prepare for in-climate conditions that may affect their crops. Several mobile applications exist to provide farmers with information about nearby markets and prices, mapping to potential clients, feeding schedules for cattle and local veterinary information.

Banking
Millions of Africans utilize mobile technology as a banking instrument. Since 2007, Safaricom and Vodafone’s M-PESA application has allowed users to store funds on their mobile decides in order to transfer funds to other users, pay bills, or make other purchases. In 2009, a 10th of Kenya’s GDP was being circulated via M-PESA. Former Safaricom CEO Michael Joseph noted that mobile technology has been transformative for the informal business sector, which comprises about 70 percent of jobs in Kenya. This increase has been instrumental in helping surge GDP rates throughout the developing world.

Health
Mobile phones allow endless distribution of health resources, which has led to the development of mHealth, or mobile health, programs. Field workers can use their mobile devices to work with experts to determine what conditions are treatable at a local level and what patients need to be transported to a hospital. This increased communication saves time and money and also helps to ensure appropriate treatment. Text messages have also shown to be vital in communicating stock levels of medications and resources in remote locations. Additionally, public health organizations have organized text message campaigns to increase preventative habits against fatal diseases.