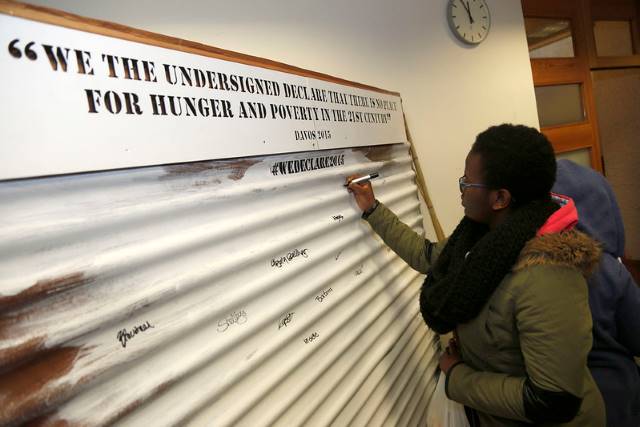 In an effort to combat rising poverty rates caused by Switzerland’s COVID-19 economic recession, the canton of Geneva has voted to implement a minimum wage of $25 an hour, which is roughly equal to $4,100 a month according to the 41-hour Swiss workweek. Reportedly, the highest minimum wage in the world, the vote came after recent media footage showed thousands of people waiting for food aid, thus highlighting the city’s apparent struggle with poverty. Low-wage service workers and vulnerable groups, such as undocumented workers, who have been hit particularly hard by the pandemic stand to directly benefit from the initiative to increase the minimum wage in Geneva.

Minimum wage hikes are a longstanding, though controversial method to combat poverty. Pro arguments for minimum wages state that it increases the overall standard of living, boosts worker morale, and, if the wages are good enough, moves people out of poverty. On the contrary, economists have noted that the well-meaning increase can actually create job loss, increase inflation and labor market competition, thereby adding to poverty rates. Opponents in Geneva used this claim of job loss to sway the vote against the initiative but the attempt was responded to by Alexander Eniline of the Swiss Labour party as “baseless.” Though it is important to note the number of people in a household and how many of them work, studies show that minimum wages can reduce poverty when coupled with in-work benefits or other national policies aimed at supporting low-income households. With this in mind, Switzerland’s extensive social security coverage and welfare policies may be strong enough to offset the negative effects of a minimum wage increase.

Details of the Minimum Wage in Geneva Vote

This proposal to introduce a minimum wage to Geneva was not the first of its kind. In 2011, then again in 2014, the measure was widely rejected by the canton. Similarly, the most recent vote which was proposed through the country’s popular initiatives ballot on September 27, 2020, barely passed, with 42% of voters against the implementation. Media reports question whether Switzerland’s economic fallout following COVID-19 and the surprising response to free food distribution have pushed the vote over the edge.

On one side, Michael Grampp, a chief economist in Switzerland, stated, “It definitely helped push the vote towards almost 60%,” while Mauro Poggia, Geneva State Counselor, did not agree that COVID-19 had a large impact on the vote. Though the pandemic’s amount of influence remains unclear, the wage increase has been viewed as a collective act of solidarity with the city’s growing poor population.

The wage increase comes into effect on November 1 and will benefit 30,000 low-wage workers, which amounts to about 6% of the canton. According to Groupement Transfrontalier Européen, which is an organization supporting cross border workers, two-thirds of those benefitting will be women.

Increasing Minimum Wage: Is it Enough?

Standing as one of the most expensive cities to live in in the world, the minimum wage initiative is estimated to be barely enough to push Swiss workers above the poverty line. While $25 an hour may seem high when compared to the U.S. federal minimum wage of $7.25, Geneva’s average cost of rent for two people is roughly $3,250. This leaves less than $1000 left for food, utilities and other necessities.

Though Switzerland’s strong social security policies have kept the economic effects of COVID-19 from devastating Geneva, the city’s population is hopeful that the measure of increasing minimum wage in Geneva will give low-wage workers another boost. Campaigners have called it a “step towards equality” and a more “dignified” way of living.