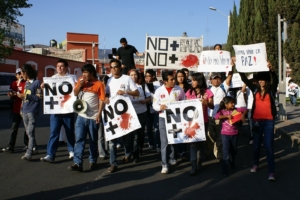 Since the Mexican government declared war against drug cartels in 2006, nationwide violence between cartels, police and the military has been taking a steep toll. The National Institute of Statistics and Geography (INEGI)  estimates the war led to 300,000 homicides and the disappearance of 66,000 people since 2006. This increased violence raises particular concern about how Mexico’s drug war affects education quality.

The study emphasizes how homicide is now the second leading cause of death for Mexican males aged 15-24, a critical age range for learning skills from education and entering the labor force. Between 2000 and 2019, 21,000 Mexicans under 18 were killed, while 7,000 have disappeared. Cartels have also recruited youths in economically deprived areas where a lack of opportunities and resources contribute to youth recruitment. In 2019 alone, cartels recruited an estimated 30,000 Mexican youths. This recruitment targeting is partly why youths sometimes avoid or drop out of school. In 2006, at the start of the drug war, 11,664 Mexican youths did not attend primary school, compared to 106,131 in 2019.

In 2011, 7,000 Acapulco teachers protested against gang violence threatening their schools. They called on the government to provide safety in the face of teachers being attacked, extorted and kidnapped. More than 100 schools shut down in Acapulco due to teachers standing up to cartels who had demanded half their salaries in extortion. Schools only reopened four years later, in 2015, after the Mexican National Guard stepped in to ensure student and teacher safety.

Mexican citizens have increasingly mobilized to demand accountability from their government and better protection for schools. In 2014, the disappearance of 43 students in Guerrero sparked national protests over the government’s inability to provide a safe, educational experience for teachers and students. Mexico continues to fight drug-related violence affecting schools, knowing how important education is in reducing poverty and improving opportunities.