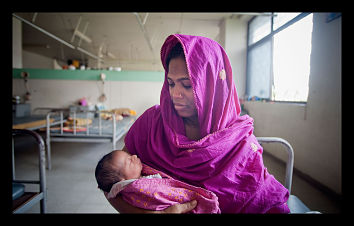 This is the fourth in a series of posts exploring the UN’s Millennium Development Goals. The MDGs are a series of eight interconnected goals agreed upon by almost every country in the world, based on a shared commitment to improving the social, political, and economic lives of all people. These goals are to met by 2015 and, two years out from this deadline, it is time to recognize both the incredible progress we have made and the work we have left to do.

The fourth MDG is to reduce the mortality rate for children under five by at least two thirds from 1990 to 2015. The world has made amazing progress on this front. Despite population growth, the number of deaths in children under five worldwide has decreased significantly from 12.4 million in 1990 to 6.9 million in 2011. This represents 14,000 fewer child deaths every day.

This improvement has been made possible by a wide variety of programs. Vaccines are an excellent way to avoid easily preventable deaths. According to the World Health Organization, vaccine-preventable diseases accounted for roughly 17% of deaths of children under five in 2008, representing 1.5 million deaths. This figure can be diminished fairly easily by providing vaccines for diseases such meningitis, tuberculosis, and rotavirus. The measles vaccine alone has prevented more than 10 million child deaths since 2000.

Another reliable method for reducing child mortality is the education of women. Even minimal education for a mother can significantly improve her children’s likelihood of survival. A UNDP program in Malaysia is capitalizing on this opportunity by surveying 2500 single mothers. These women are faced with incredible challenges, including poverty, lack of education and job opportunities, and social stigmatization. The results of the survey will be used to better understand how best to work with these women, enabling them to find enjoyable work and care for their children.

Another successful UNDP program is taking place in Canelones, a populous and impoverished area of Uruguay where roughly 35,000 citizens are raising children in extreme poverty. As a result of a UNDP study in the area that revealed severe health risks for children in poorer areas, several organizations teamed up to create “Canelones Grows with You”. This program provides the most vulnerable families in Canelones with comprehensive training on care for young children, including nutritional supplements and information on how to use them, as well as regular pregnancy check-ups. The program also encourages a sense of community that encompasses even the poorest families, who are often unaware of or feel excluded from public health clinics, schools, and eateries. “Canelones Grows with You” was so successful in reducing rates of malnutrition, low height, low birth weight, and prematurity that it has been adopted as official government policy with a program called “Uruguay Grows with You”.

Between 1990 and 2011, child mortality has almost been cut in half, decreasing in every region. This is an incredible achievement. However, with the goal set at a two-thirds reduction of the 1990 figure by 2015, we definitely have our work cut out for us. One of every nine children in sub-Saharan Africa still dies before they reach the age of five. In Southern Asia, this figure is one of every sixteen. Children from poorer families are almost twice as likely to die before their fifth birthday than those from wealthier families. Any preventable child deaths are unacceptable, but these figures are horrifyingly so.

Every child deserves a chance to live, and all parents deserve the opportunity to provide for their child. Significant progress has been made towards this ideal, and we must continue this important work if we hope to achieve the fourth Millennium Development Goal.