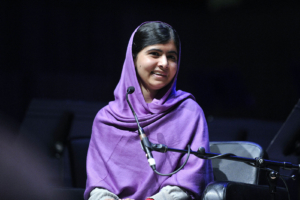 Former First Lady Michelle Obama, while speaking on the importance of women’s education in Senegal, stated, “When girls are educated, their countries become stronger and more prosperous.” Her speech, titled ‘You Are Role Models,’ sought to encourage females around the world to continue to fight for their education – not only because it was an inherent right, but because it also led to more opportunities. One cannot overstate the importance of women’s education. As Michelle Obama described, educated women can change the lives of millions. They can serve as role models for the world and encourage the expansion of quality education. Malala Yousafzai is a notable woman who is fighting for women’s education to end poverty.

Malala Yousafzai is one of the few individuals brave enough to carry the responsibility of women’s education. Malala was born on July 12, 1997, in Mingora, Pakistan. As a child, Yousafazi attended the school her father established – Khushal Girls High School and College – and quickly developed a reputation for dedication to her studies. Malala’s commitment to learning, however, did not only exist in her school building. When reflecting on her childhood, Malala recalled that “From an early age, I was interested in politics and sat on my father’s knee listening to everything he and his friends discussed.”

The Arrival of the Taliban

Malala’s love for education, however, came to a complete stop in 2008, when the Taliban arrived. The Taliban is a radicalized, religious and political group that emerged in 1978, after the Afghan War. Since the early 2000s, the Taliban developed a reputation for asserting strict interpretations of law and order, heavily determined by religious ideology. Using the conservative Pashtun social code, the Taliban created a brutally repressive regime.

Once they arrived in Pakistan, the Taliban implemented strict rules and punishments – especially targeting women. They ordered various rules, but one was particularly crushing to Malala. The Taliban ordered that women were to experience exclusion from public life – essentially, the Taliban banned women from attaining an education.

In 2012, Malala began to speak out against the Taliban. Using the pseudonym Gul Makai, Malala began writing for the BBC online. Her blogs contained advocacy and a peek into the daily life of living under Taliban rule.

However, as Malala’s popularity increased, so did the threat of the Taliban. After several months of writing, The New York Times revealed that Malala was really “Gul Makai,” resulting in the Taliban naming her one of its main targets.

On October 9, 2012, a Taliban gunman shot Malala as she rode home on a bus after school in Pakistan’s Swat Valley. She was 15 years old at the time.

Despite the trauma of the event and the partial loss of brain function, Malala never quit advocating for women’s education. Today, she runs a nonprofit organization called the Malala Fund. The Malala Fund invests in education and activists who are challenging the policies and practices that prevent women from receiving an education. Over the years, the Malala Fund has helped expand access to education for girls and women, improve the quality and relevance of education and strengthen government policy to ensure safe learning environments. Today, Malala focuses on women’s education and politics. She holds a childhood dream of becoming the Prime Minister of Pakistan, and she hopes to ensure the right to education for all children.

Malala’s persistent advocacy truly displays the importance of women’s education. Education has the ability to break the constraints of gender inequality, thus allowing females to acquire more opportunities and responsibilities. Education allows an individual to become economically, socially and politically independent; they are able to support themselves and take on various positions in government, business and civil society. As women rise above gender inequality, they are able to support their families, develop leadership skills and achieve more representation in their government.

Overall, Malala Yousafzai is fighting for women’s education, having risked her life multiple times. Through her efforts, gender inequality is decreasing, thus allowing females around the world to dig themselves out of poverty and avoid the abuse that accompanies the setting.