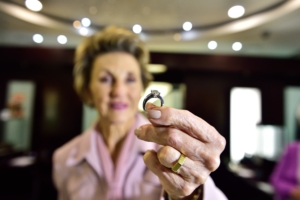 The inhumane conditions of diamond mines have become a widely scrutinized issue in recent years. Critics have labeled these diamonds as “blood diamonds” or “conflict diamonds”. These evocative epithets illustrate the historically exploitative labor practices prevalent among the diamond industry. Due to the growing consumer awareness of unethical mining practices, the criteria for purchasing diamonds have experienced a crucial shift. Since the turn of the century, consumers have largely stopped settling for anything less than ethically produced diamonds. Recently, lab-grown diamonds have emerged as a certifiably ethical alternative to traditionally mined diamonds.

The Rise of the Lab-Grown Diamond

Lab-grown diamonds are synthesized in laboratories with industrial processes that mimic how diamonds form inside the Earth or in outer space. In recent years, scientists have greatly improved the techniques needed to synthetically manufacture diamonds. As recently as the early 2000s, the only lab-grown diamonds available were either very small or tinted with impurities. In the last five years, however, the diamond industry has perfected the synthetic fabrication of diamonds. These technological advancements allow for the production of large, clear stones that bear no significant difference from natural diamonds.

This technological advancement has taken off quickly. In 2016, around a dozen lab diamond growers and sellers formed a trade group called the International Grown Diamond Association (IGDA). The IGDA now has around 50 members. Lab-grown diamonds now account for around 2-3% of the $14 billion diamond market. Some analysts predict that lab-grown diamonds will occupy up to 10% of the market by 2030.

Large corporations and organizations have made adjustments to welcome the lab-grown diamond into the diamond industry. The Federal Trade Commission has expanded the definition of a diamond to include lab-grown gems. In addition, the FTC has dropped “synthetic” as a recommended descriptor for lab-grown diamonds. The success of lab-grown diamonds has even pushed De Beers Group, the global diamond monopoly which once vowed never to sell man-made diamonds, to create a lab-grown diamond line known as Lightbox Jewelry.

Several smaller companies that offer lab-grown diamonds have formed as well. These companies utilize their diamonds’ ethical sourcing and sustainability as a major selling point. Additionally, these companies are engaging in many forms of activism. Many of these companies divert a percentage of their profits to poverty reduction and humanitarian efforts around the world.

Collectively, the efforts of these companies will bring more awareness to issues in the diamond industry as well as aid the communities that were directly exploited by unethical mining practices. As technological and industrial capabilities increase, it is hoped that the diamond industry will take advantage and slowly transition away from its dependence on hazardous mines and labor practices.

Hunger in Nigeria: A Crisis Impacted by COVID-19 Poverty in Sweden
Scroll to top