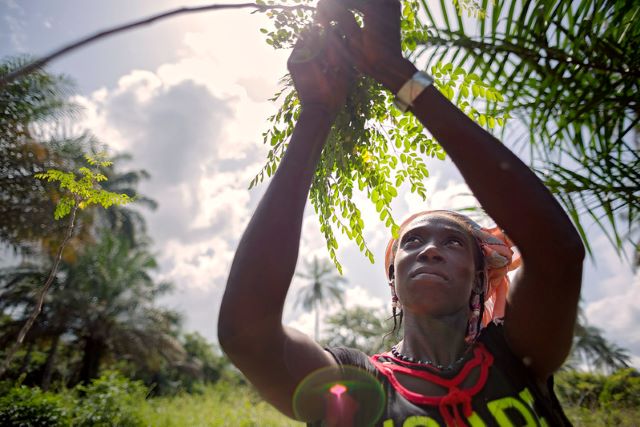 Kuli Kuli is a company that sells products made from the moringa tree, a superfood that is high in vitamins, antioxidants, plant proteins and anti-inflammatory properties, with twice the nutrient value of kale. The company’s products consist of energy bars, tea shots and a variety of powders and smoothie mixes.

Lisa Curtis developed a heart for those living in extreme poverty while serving briefly as a regional youth coordinator for the United Nations. This led her to volunteer for the Peace Corps in 2010 at age 22, which sent her to work at a community clinic in rural Nigeria. While there, she was introduced to a locally-grown energy source, moringa, and was impressed by both its healing properties and nutritional punch. She quickly saw how a moringa market could address not only the malnutrition issues of the people and villages she worked with but also provide business opportunities for local farmers.

Moringa has restorative powers for the human body but it turns out that it also has potential for sustainable economic growth. Kuli Kuli addresses these needs simultaneously by working with small but high-quality farmers and establishing supply chains to foster economic growth and nutritional security in West Africa. Notably, most of the farmers that the company works with are women. In 2020, the company sourced moringa from more than 2,400 farmers across 13 countries, with the largest group being African women. The company generated $5.2 million for these farmers and helped to plant and preserve more than 24,600,000 moringa trees.

Not only does the company help these farms to scale up their businesses but it also provides training to increase the quality of their products and local use of the plant. Moringa is invaluable for farmers. It requires little water, provides restorative properties for the soil and overall is fairly easy to grow, especially in rural regions where the soil is untainted by industrial areas. The company founder’s ambitious vision seeks to eliminate gender inequality, income inequality, global malnutrition and extreme poverty.

Creating a New Market in Moringa

Since its launch in 2014, Kuli Kuli has dominated the market on moringa products. Though moringa grows naturally in parts of Asia, Africa and South America, the company was the first to introduce the superfood to the United States’ wellness market. By 2020, the company was selling products in 11,000 stores nationwide. According to Curtis, the company has averaged 100% growth every year. Some years do even better, as demonstrated by 2017’s Series A financing, which tripled its retail business, and 2019’s $5 million Series B financing deal with Griffith Foods and Kellogg. With this most recent investment, Kuli Kuli plans to expand into moringa ingredient products. Certainly, Griffith Foods’ 30-country chain is quite a catch for the young wellness startup.

Kuli Kuli’s success demonstrates the power of developing new markets in developing countries that expand into developed ones. Not only is the company empowering rural farmers and fighting malnutrition and extreme poverty in developing countries but moringa products are fast climbing the list of top green wellness supplements in the United States. By noticing this virtually untapped international market and being quick to capitalize on it, the company found itself supplying more than half of the U.S. retail moringa market by 2020, a mere six years after its startup.