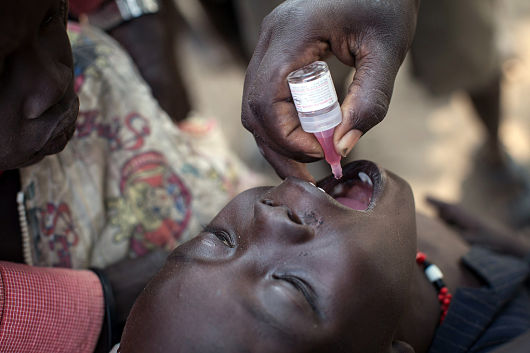 Polio can have devastating effects on victims. Usually with little or no symptoms, the disease cripples and eventually paralyzes its victims. In a 2013-14 Polio outbreak in the Horn of Africa, 223 children were paralyzed due to Polio.

The disease is transmitted through human feces, which often gets mixed with drinking sources. According to the World Health Organization (WHO), 2.4 billion people worldwide do not have access to improved sanitation facilities.

Due to this, polio has been one of the most persistent diseases to plague the developing world. Vaccines have existed for some time now and have become more and more accessible to developing nations due to aggressive world health initiatives. Since there is no cure, strategies to immunize children have been utilized to eradicate the disease.

There is hope now that complete elimination is right around the corner. On August 11, 2015, the continent of Africa celebrated being polio free for one year, with the last reported case in Somalia last year on August 11. Polio virus surveillance has improved significantly over the years and Nigeria, a hotspot for the virus, reported its last case of polio over a year ago in July of 2014.

With Africa becoming polio free for the last year, the last two remaining nations to report infections are now Afghanistan and Pakistan. With more resources now able to target those nations, protocols in Africa must continue to be implemented on a consistent basis to prevent a relapse.

For that to happen, four tasks must be implemented.

First, surveillance methods must continue to be built upon and improved. Dr Hamid Jafari, Director of the Global Polio Eradication Initiative at WHO, warns that there is no guarantee that zero reported infections means the fight is won. He is quoted saying, “in the past we have had year-long periods when we thought the polio virus had gone from the Horn of Africa and central Africa, only to find out that we were simply missing transmission because our surveillance systems were not strong enough to spot cases.”

The second task requires creating programs to reach missing children. There are still pockets of children not vaccinated in rural areas in Africa. Security issues have kept health officials from reaching them. Any child without the vaccine is vulnerable to the virus. Increasing vaccination must remain a top priority.

Thirdly, routine immunization efforts must continue to ensure no relapse. It is not enough to just immunize the current generation. Children of the future must be continuously immunized to prevent the virus from reemerging.

According to WHO this can be done “in Africa: Angola, Chad, DRC, Ethiopia, Nigeria, Somalia and South Sudan, by partnering notably with such organizations as Gavi, the Vaccine Alliance. Strengthening routine immunization in these countries will help to reach the significant numbers of children who remain unvaccinated there, giving the poliovirus less opportunity than ever to circulate.”

Lastly, strong leadership is needed to ensure that initiatives stay in place and countries stay steadfast to the cause. Key contributors such as the UK, Saudi Arabia and the United States must continue to provide aid and support local efforts in Africa. Much is still needed to completely eradicate polio in Africa, but the night is always darkest before the dawn.