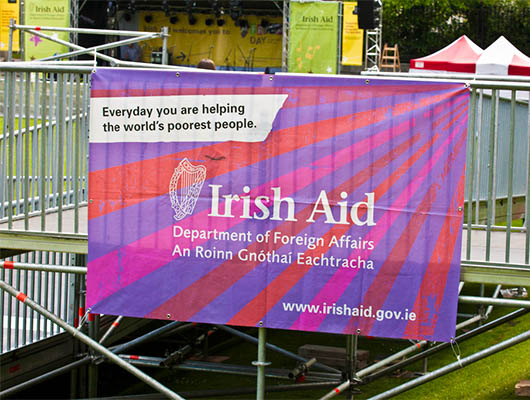 Countries around the world have been revamping their anti-poverty efforts in preparation for the establishment of new Sustainable Development Goals in September. Although Ireland has not yet met its target of allocating 0.7% of Gross National Product, or GNP, to overseas development aid, it is making improvements.

Minister of Foreign Affairs Charlie Flanagan recently stated his confidence in Ireland’s aid program. In fact, at the launch of the Irish Aid annual report for 2014, he described the program as one of the most effective in the world during tough economic years. He believes that the 0.7 percent target will soon be reached.

The report revealed that Ireland provided more than 85 million Euros in humanitarian assistance and 269 tons of critical humanitarian supplies like blankets and tents in 2014. Flanagan boasted of the Irish people’s engagement with development assistance, saying that they take pride in the collective Irish effort.

According to Flanagan, Ireland’s overseas aid program is lifting millions of people out of poverty and hunger. In order to evidence this claim, he broke down the program’s contributions to its Key Partner Countries—Ethiopia and Mozambique.

Flanagan pointed out that the program has worked to reduce the number of mothers dying during childbirth. In Ethiopia specifically, support for maternal health services for poor women contributed to a 70 percent reduction in deaths during childbirth.

In terms of education, support for training and recruiting teachers has helped to increase the number of girls enrolled in school. In fact, in Mozambique, the development program’s assistance contributed to a nine percent increase in the enrollment of girls in school.

Minister of State for Development Seán Sherlock has pointed out that 2014 was a year of unprecedented levels of humanitarian crises worldwide. He stressed the effectiveness and efficiency of Ireland’s response to such crises, and maintained a confident, yet realistic outlook on the program’s ability to respond similarly in the future.

As just one example, Sherlock claims to have personally witnessed the impact of roughly 18 million Euros in funding provided to Sierra Leone and Liberia during the Ebola crisis. This is the type of crisis that no one could possibly have planned for, and yet Ireland rose to the occasion, paving the way for other contributors during crisis.

Sherlock provided additional evidence for the effectiveness of the Irish Aid program by pointing to the Organization for Economic Cooperation and Development’s, or OECD, review. According to Sherlock, the OECD concluded—through thorough assessment—that the Irish Aid program was one of the most effective of its kind worldwide.

Sherlock echoed Flanagan’s re-commitment to reaching the 0.7 percent target, but he confessed candidly that this goal will not be reached in 2015. To clarify, this does not mean that Ireland is not on the right track, or that it has not carried its weight thus far in terms of the anti-poverty and sustainable development effort.

Both Sherlock and Flanagan have reassured the general public that with time, Ireland will proudly allocate 0.7 percent or more of GNP to overseas development aid. Until that time comes, the Irish Aid program will continue to combat poverty and improve the lives of the world’s most suffering people.

5 Possible Changes to Bring a New Era of Reproductive HealthWhy Does Only 2.7% of Foreign Aid Go Towards Higher Education?
Scroll to top