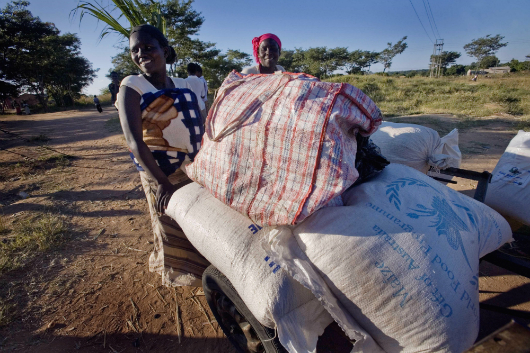 What is International Aid? International aid is any form of needed assistance by one country, or multilateral institution, to another.

Aid is most commonly provided as official developmental assistance (ODA), which targets poverty reduction and the promotion of public welfare and economic development. The World Food Programme and the United Nations are examples of international organizations that provide significant amounts of aid to developing countries.

Investing in foreign aid is a just cause. The leading U.S. Government agency, USAID, alone saves more than 3 million lives each year through immunization programs. Over 850,000 people are educated about HIV prevention annually through USAID, and 40,000 have been trained to protect their countries for the long-term. Other forms of lasting education strategies include USAID’s population program, which serves more than 50 million couples worldwide, and USAID land cultivation training in Honduras that helps 21,000 families to practice subsistence farming and has reduced soil erosion by 70,000 tons.

Foreign aid is not just giving away money and resources; it means making a concerted attempt to restructure sectors in need of improvement. USAID invested $15 million in technical assistance for developing countries’ energy sectors, which created a $50 billion annual market for private power.

With all this good, would it surprise you that U.S. foreign assistance uses less than 1% of the total federal budget?

Less than 1% of the U.S. total federal budget values to about $50 billion. In comparison, the U.S. military defense budget totals to about $663 billion. To put this in per capita terms, The Guardian calculated that the U.S. spends $73 per person on aid and $1,763 per person on defense.

In 1970, The U.S. joined the ranks of many other wealthy nations with plans to give 0.7% of their gross national income as ODA. Of the twenty-three players, only five succeeded in 2011,and the U.S. was not one of them.

But why is this even a problem?

Other countries with fewer capabilities are doing more than their part while the U.S. is falling short. Public perception plays a huge role in how the budget is made and, subsequently, the degree of U.S. involvement in global aid. Americans, on average, estimated 28% of the federal budget is spent on foreign aid. Four in ten Americans also believe aid is given remotely, allowing the recipient to use it as they see fit. As a result, few people vote for budget increases.

In actuality, most U.S. foreign aid is issued to a specific issue and program with clear endpoints.

Most commonly, Americans believe foreign aid to be a waste of resources. Who does the money help and in what ways? In fact, it helps both the recipient and donor.

Today, the donor-consumer relationship is far more influential than ever because developing countries and economies are in transition. Africa’s net growth momentum, for example, is expected to continue to rise with GDP growth increasing from 4.6% in 2015 to 4.9% in 2016. Home to five of the world’s twelve fastest growing economies, the supercontinent hosts a growing middle class and large youth population. While Africa’s political and economic history promises a challenge, its potential is enormous.