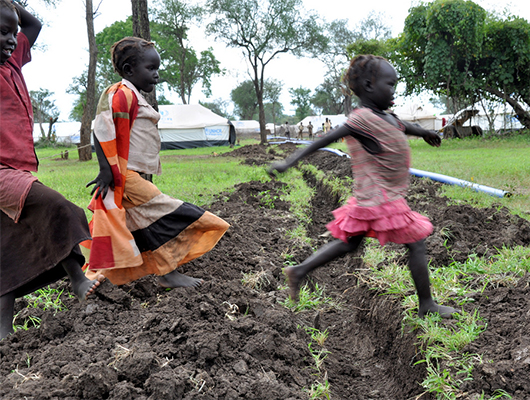 The Republic of South Sudan is the newest country in the world, founded in 2011 following a secession from Sudan. The secession resulted from years of bloody civil war in Sudan. However, as recently as 2013, there was a new wave of conflict in South Sudan, with more than two million people displaced from their homes in the past two years. With this conflict, people are unable to maintain agriculture or other jobs, and food prices are rising. The poverty as a result of this conflict is leaving people malnourished and without access to food or clean water. Thankfully, some organizations are coming up with initiatives to improve the lives of the South Sudanese.

Organizations and governments initiated different forms of help for the situation in South Sudan. Some of the main strategies have been promoting peace, increasing access to food and sanitation, and encouraging foreign investment.

Oxfam America, a nonprofit organization aiming to “fix the injustice of poverty,” has initiatives to combat multiple issues caused by poverty and conflict: improve access to clean water, food and sanitation, and promote peace. Some of the response includes rebuilding wells and sanitation facilities for hospitals. In order to further people’s self-sustainability, Oxfam also gives materials to help communities get food, such as seeds and fishing equipment. For Oxfam, initiatives to fix issues caused by poverty is the focus, while for others, the encouragement of international investment is the way to help South Sudan.

South Sudan has mineral deposits and oil reserves. The South Sudanese government is encouraging foreign investors to invest in this sector of the economy. They formed the Investment Protection Act of South Sudan in 2011 to protect the land and intellectual property rights of national and foreign investors.

The African Centre for the Constructive Resolution of Disputes, or ACCORD, is a South African organization aiming to relieve conflict in Africa. ACCORD has a South Sudan Initiative, or SSI, which focuses on building and maintaining peace between Sudan and South Sudan, as well as among the South Sudanese citizens. Some of the conflict identification and resolution efforts include “coordinating the efforts to develop a standardized conflict management training toolkit,” and “providing conflict management, mediation, and negotiation trainings for South Sudanese, officials, diplomats” and “United Nations Mission in South Sudan civil affairs officers.”

Some see bolstering the economy as the solution that will better the lives of those in South Sudan, some view access to sanitation and food as the place to start, and some believe peacebuilding techniques will help end the conflict and give way to a healthier, more efficient society. While separately, these initiatives may not combat every issue that exists within the complicated and historical conflict in South Sudan, with all of these initiatives acting simultaneously, a better future for the South Sudanese seems possible.