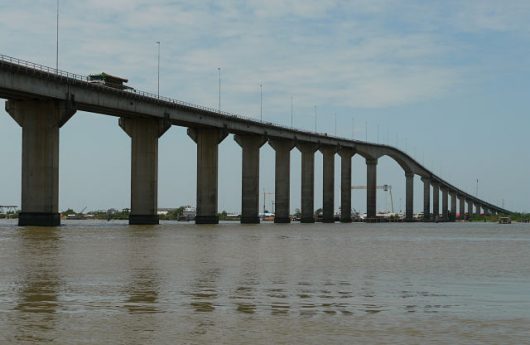 Infrastructure in Suriname is on both ends of the spectrum when it comes to quality, with some facets being up to date and self-sufficient, while others have fallen into serious disrepair due to improper maintenance and oversight. Suriname is sparsely populated in most areas, with most of its people inhabiting the capital, Paramaribo, and the surrounding regions. Most of the country is heavily forested making habitation and transport impossible.

Paramaribo is the country’s main hub with a vast majority of infrastructure in Suriname focused in this one city. Roads, railways, bridges, imports, and exports are all centered in Paramaribo making it the main support for Suriname’s economy. This translated to economic instability with little to no possibility of growth. Unless infrastructure in Suriname is expanded to the outer regions of the country and thence to its neighbors, it will continue to deteriorate and threaten an economic collapse.

Water, railway, and flight are the main modes of travel and transporting goods across the forested areas of Suriname. Unfortunately, many of the roads and airport runways are unpaved, making the operational expenses a fiscal nightmare. According to the 2013 World Economic Forum Global Competitiveness Report, the quality of Suriname’s roads ranks 71st out of 148 countries, while the airports and railroads rank 104th and 108th, respectively.

Infrastructure in Suriname is constrained by several factors:

Despite this monopolization, however, service and access to telecommunication services are far more advanced than all other aspects of the country’s infrastructure, ranking 7th in the 2013 World Economic Forum Global Competitiveness Report. These last few years have seen a rise in government plans for developing infrastructure in Suriname, all focused on increasing the country’s status as an economic competitor. Telecommunication networks are being opened to the private sector, allowing for more competitors and lower rates.

The government’s main concern is developing the Paramaribo port (as the country’s largest) to increase its capacity to handle more exports. This port currently handles from five to six hundred vessels. Exports include 40 percent of the country’s oil (taken from the Tambaradjo oil field), gold, bauxite, rice and tropical wood from its forests.

Investment from the public and private sectors have enabled the development of the physical structure of the ports in Suriname, along with modernization of cargo holds and storage. This not only allows for easier transport but ensures greater protection of goods.

Looking from All Angles: Fighting Poverty with Humanity Unified10 Facts About Poverty in Brazil
Scroll to top