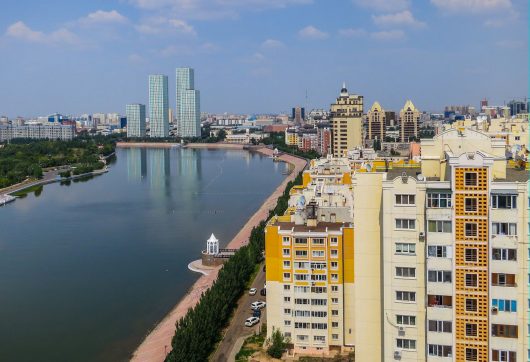 Kazakhstan spans from the mythical Russian Steppe and the Caspian Sea in the West to China and Mongolia in the East. Its southern border hovers over the deserts and mountains of Central Asia. Eastern raiders took turns traveling through its landscape (Cumans, Mongols and Turkish tribes), and each left a piece of themselves behind as they raided and conquered the ancient Rus.

Then in the eighteenth century, the Russians turned their eyes east and began to conquer and colonize. Soviet programs in the 1950s and 1960s lead more Russians and other ethnic groups to Kazakhstan to farm its rich soil and exploit the country’s natural resources. But in 1991 with the fall of the Soviet Union, like so many other ex-Soviet nations it fell on the Kazakhs to maintain their new independent state. The aging infrastructure in Kazakhstan needed a boost to maintain the stability of the country’s developing economy.

The international community is concerned about the state of infrastructure in Kazakhstan, particularly road safety. The Center for Strategic and International Studies (CSIS) estimates that traffic incidents cost the country $9 billion annually; the GDP of Kazakhstan was $451.2 billion in 2016, which means that traffic incidents cost the country about 9 percent of its GDP.

Due to the interest in international trade between the East and the West, most traffic flows that way, and many international institutions and countries have an interest in seeing safety improvements along these routes to make trade safer.

A country report on infrastructure and finance compiled by the Transport Corridor Europe-Caucasus-Asia (TRACECA) records that there are six major international sponsors to improving infrastructure in Kazakhstan. The members are an eclectic group of investors seek to move goods east and west and north and south. Much of the money is being spent to improve trade between Europe and China.

One example of these investors is the European Bank of Reconstruction and Development (EBRD). The TRACECA report states that the EBRD is interested in regional integration of Kazakhstan and supports this goal by investing in the improvement of the Western Europe–Western China trade corridor. This project is estimated to shorten the shipping time between Asia and Europe by 10 to 12 days.

Other Infrastructure Areas for Improvement

Roadways are not the only infrastructure in Kazakhstan targeted for improvement. Ports, railways and airports are all on the radar of theinternational community. The EBRD has a partnership with an infrastructure company in Kazakhstan called Kazakhstan Temir Zholy; in 2015, the EBRD provided a $37.2 billion dollar loan to the company.

One of the Kazakhstan Temir Zholy’s main projects is improving the Aktau port, which it manages, along the northern Caspian Sea. As of 2015, the improvement of the port has increased the port’s tonnage to 3 million. The target tonnage goal is 21 million tonnes by 2020.

The quality of infrastructure in Kazakhstan will only improve in the coming years. Lucrative trade deals and Kazakhstan’s central geographic location will ensure that investment will continue to flow into the country. Foreign investment can improve the economy of a country and eventually allow the country to stand on its own.

Hopefully, the aid and investments provided to Kazakhstan will reveal itself as a success story in the coming years.