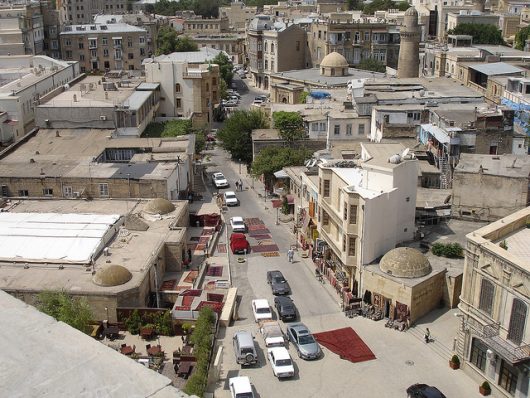 Azerbaijan, a country east of Turkey and located between the Black and Caspian Seas, makes for a perfect gateway linking southwest Asia and Europe. The country’s long history of being subjugated under Russia has made it a weak connection in the past, but now with the infrastructure in Azerbaijan strengthening, it is not only gaining a name in the world, but also seeing its citizens’ standards of living improve. While Azerbaijan still has some hurdles to overcome, the world is watching Azerbaijan’s poverty rate decrease and infrastructure improve.

Part of Azerbaijan’s difficulty in overcoming its weak infrastructure stems from its still-recent rule by Russia. After World War Ⅰ, Azerbaijan broke away and claimed independence. Many countries recognized its independence and world leaders appreciated its people’s dream of freedom. U.S. President Woodrow Wilson, in particular, commented on the parallel ideals of the United States and Azerbaijan. Azerbaijan’s independence did not last long. After only two years of independence, communist Russia invaded Azerbaijan and governed it for 70 years.

After the political subjugation and various wars of that 70-year period, Azerbaijan was able to claim independence again in 1991. Shortly afterward, the country elected Abulfaz Elchibey, although he was quickly replaced by Heydar Aliyev (the current president’s father) in 1993. President Heydar Aliyev was able to stabilize the country and began the journey to using its oil supply to strengthen the infrastructure in Azerbaijan and bring wealth to the country. Some are still concerned that Azerbaijan’s political future is not void of difficulty, although the current president, Ilham Aliyev, is using his experience in the oil industry, continuing in his father’s footsteps and bringing better living conditions to Azerbaijan’s people.

Azerbaijan has been able to grow its infrastructure so dramatically during the past ten years because of the oil market. With the increased profit and wealth coming into the country, President Aliyev is focussing on roads, railways and air transportation. During the last ten years, Azerbaijan has built more than 6,000 miles of road plus 300 bridges and restructured all main roads to make traveling between countries easier. As ground transportation improves and air travel becomes necessary, President Aliyev has also begun pushing for a focus on water portage as well.

Along with the improvements to transportation infrastructure, there have been significant improvements in many other areas, particularly regarding the internet. Azerbaijan has had expensive access, content blocking and slow speeds. While there are no real signs of transparency in what is monitored and blocked, there have been significant contributions to reducing the price and increasing the speed. In 2015, the government set down plans to improve the broadband infrastructure to give citizens faster and easier access.

Even with the improvements to many areas of infrastructure in Azerbaijan, it is still lacking in drinkable water. Gaining clean water for the whole country will be a long process, but the opening of Azersu’s Jeyranbatan ultrafiltration water purification facility in 2015 opened doors for clean water to become a staple. This complex’s focus is on some of the high population areas where lack of water has been an issue. Once Azerbaijan can find cheaper and simpler means of purifying water, then providing clean water to more rural areas will become easier.

Azerbaijan has invested billions into its infrastructure for transportation, internet, water and energy. As the infrastructure in Azerbaijan improves, so will its connection to the continents and its place in the world. Azerbaijan is on a path that will continue to improve its facilities and bring safe and reliable residences to citizens and visitors. Other countries will use their roads, rails and boats as a transit center, which will bring more wealth and jobs into the country. While there is much to look forward to, it will also be a trying time as many countries vie for dominance in using Azerbaijan as an increasingly important part of that North-South route that would link all of Europe to South Asia.