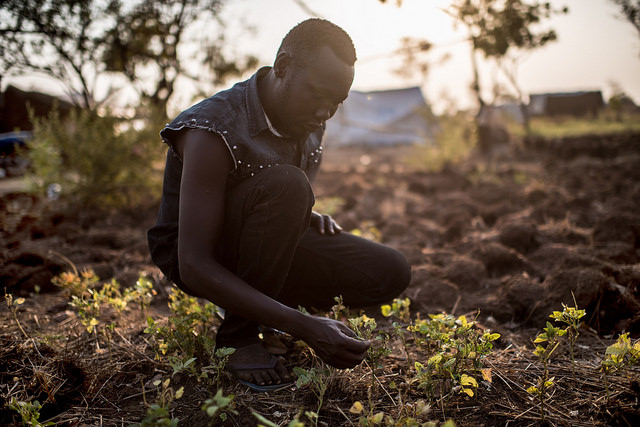 South Sudan declared independence in July 2011 and is the world’s youngest nation. It is located in East Africa and is known to have rich and arable soil that is incredibly well suited to farming.

South Sudan is also going through a food insecurity crisis. The aftermath of a four-year civil war, the deaths and displacement of citizens near the nation’s northern border, poor infrastructure and a lack of knowledge regarding sustainable agriculture practices contribute to the 4.8 million food insecure people. If sustainable agriculture in South Sudan makes no advances, an estimated 5.1 million people are expected to go hungry in 2018.

In order to realize this goal, South Sudan must prioritize infrastructure improvements in targeted areas with high agricultural potential. Having more paved roads would ensure that farmers are able to make full use of their yields and would also reduce carbon emissions.

Uganda has provided aid to South Sudan following the outbreak of the December 2013 conflict in South Sudan. In December 2017, agencies in Uganda like the Adventist Development and Relief Agency (ADRA) focused their attention on teaching South Sudanese refugees about sustainable agriculture. ADRA challenged refugees to increase their independence by producing their own food and trained over 250 refugees in a period of five days.

The Food and Agriculture Organization of the United Nations (FAO) is currently managing a $61 million emergency rehabilitation program in South Sudan in an attempt to help 250,000 displaced farmers return to agriculture after being forced from their land.

“South Sudan is enormously rich in terms of natural resources, and with 95 percent of the population dependent on them for survival, it has huge potential for sustainable growth through agriculture,” said George Okech, Head of Office, FAO South Sudan.

According to the FAO, a lack of access to quality seeds and planting materials constrains yields. Through FAO, the most vulnerable farmers are provided with quality seeds and tools through seed fairs or direct distribution, along with training in good agronomic practices.

In areas less affected by the ongoing crisis, FAO fosters sustainable agriculture in South Sudan via farmer field schools and the promotion of seed multiplication, where selected farmers are provided with quality seed and trained in production, conditioning, storage and marketing.

In order to realize this goal, South Sudan must prioritize infrastructure improvements in targeted areas with high agricultural potential. There are many steps that need to be taken to fully implement sustainable agriculture in South Sudan, but the importance of it is known to many and progress is being made.