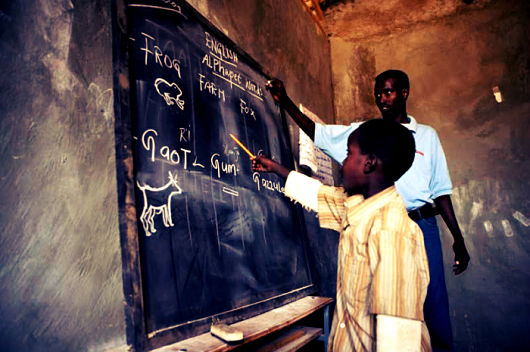 Due to severe economic disparities, there are a number of problems in Chad’s education sector, particularly in a lack of adequate supplies and tools necessary to create a functioning school environment. Many of the existing schools are simply structured, overcrowded with students, and understaffed, also lacking desks, chairs, or textbooks.

In 2012, the United Nation’s Human Development Reports revealed that only 62 percent of primary school educators in Chad were even qualified to teach. Additionally, the youth literacy rate for boys, ages 15-24, was 53.6 percent in 2012, while girls lagged behind with a literacy rate of only 42.2 percent. However, these numbers are an improvement from the past decade.

Chad’s government recently teamed up with an existing triple partnership between the United Nations International Children’s Emergency Fund (UNICEF), the Global Partnership for Education (GPE), and Educate a Child (EAC), with the intention of ameliorating its education problem.

EAC’s website states, “The Revitalizing Basic Education in Chad project works in targeted primary schools in the regions of Guéra, Ouadai, Sila and Logone Occidental, to supports the Government of Chad’s efforts to increase primary school completion rates from 37 percent in 2011 to 80 percent in 2020.”

GPE alone has donated $47.2 million to aid the project, providing ample funds to revamp schools across the country.

With the combined effort of these three organizations, 246,500 children will be able to enroll in and complete a quality primary education.

Not only is this partnership working in Chad, but also Comoros, Democratic Republic of Congo, Somalia, South Sudan, Sudan, and Yemen, where it is getting 2.5 million children a quality education. If Chad’s current success is magnified, the lives of hundreds of thousands of children will be changed for the better.

Affordable Housing Solution in Chile World Hunger Down, but Problems Persist in India and Africa
Scroll to top