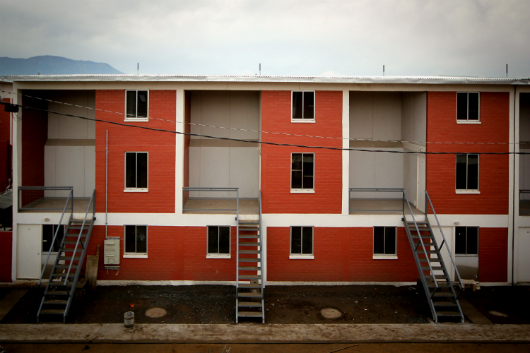 In 2004 in Iquique, Chile, the for-profit architectural company Elemental designed and built social housing units for 100 impoverished families. The company’s innovative and inexpensive design enabled this low-income community to remain in the city center, retaining access to jobs, healthcare, education and transportation, rather than being forcibly relocated to peripheral zones.

Since the 1960s, the community of 100 families had been illegally settled in slum housing. The living situation was “precarious,” a “maze without any security” with “delinquency problems,” said architect Alejandro Aravena.

In 2003 the Chilean government asked Elemental “to settle the 100 families in the 5,000-square meter-site” according to Archdaily. The government also provided a budget of 7,500 dollars per housing unit.

One and a quarter acres is needed to accommodate 100 families, so Aravena immediately rejected various common social housing models. “Neither the 1 story isolated house nor the two story house or the block were a solution to the question we had to answer” explained Aravena in a video created by Coti Donoso, courtesy of the Chile-Barrio program.

Elemental’s solution was a spin off the common row house design: each housing unit borders an equally sized empty space that the individual family designs and decorates over time. The families’ ability to have freedom and control is critical to the success of the design; they do not feel a Western-constructed design is imposed on them. Rather, they transform their own living space into a home that meets their needs and desires.

Due to the budget constraints, Elemental decided to build parts of the housing units that locals would not be able to build themselves. Each unit was “stabilized for seismic durability and equipped with the barest of basics: plumbing but no fittings for kitchen and bathroom, an access stair, and openings for doorways. Once the modular outlines were completed, residents moved in and began finishing and customizing their spaces at their own expense and at a pace that their incomes allowed, adding color, texture, and vitality,” explained MoMA’s highlight of the design on their website.

“Due to the fact that 50 percent of each unit’s volume, will eventually be self-built, the building had to be porous enough to allow each unit to expand within its structure. The initial building must therefore provide a supporting, (rather than a constraining) framework in order to avoid any negative effects of self-construction on the urban environment over time, but also to facilitate the expansion process,” said Archdaily.

The size of the interior housing unit doubled in square meters for a cost of 1,​000 U.S. dollars per household. On his website, Arevena said that, five years after the project was executed, each unit was valued at “over $20,​000.”

Because of Elemental’s success in Iquique, the company has built over a thousand similar units throughout Latin America and plans to create more in the future.