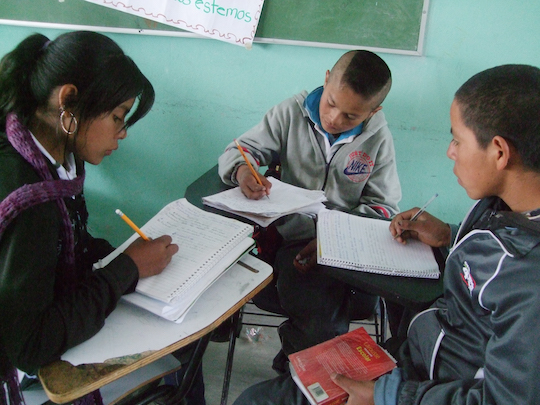 Approximately 15 percent of the Mexican population is indigenous and more than half of the state of Oaxaca’s population identifies as indigenous, according to the U.N. But the Declaration on the Rights of Indigenous Peoples, mandating non-discrimination and the right to education in Mexico, is unfortunately not enforced in all states.

Each state has its local legislation that can overlook the national provisions. Former U.N. High Commissioner for Human Rights Navi Pillay states Mexican women suffer from discrimination not only based on their gender but also on their ethnicity.

Despite the U.N.’s claim that indigenous populations in Mexico are behind in bilingual education and administration of justice, there have been improvements.

CONAFE is an organization under the federal government of Mexico that is taking on the challenge of spreading education to various Mexican populations. Not only does the institution design education plans, it also evaluates them in order to increase education levels in Mexico. The organization is in charge of rural education in Mexico.

The organization has assisted with increasing basic educational attainment. CONAFE increased the participants of expansion of early child development services by 80 percent. Additionally, the organization expanded its services to 172 of the most marginalized areas in Mexico.

Furthermore, CONAFE has proven its progress with reports that grade three scores improved by nearly 79 points, grade six by 35 points and grade nine by nearly 70 points.

CONAFE continues to provide support in the most marginalized communities of Mexico while utilizing a community-based approach. The organization presents to parents ways to best teach their children while specifically targeting fathers who have shown low participation.

Overall, CONAFE has provided educational outreach to 48,640 parents nearly reaching their target. Aside from this program, the government of Mexico has also focused on strengthening indigenous education.

UNESCO has constructed an additional program for post-2015 in Mexico based on the Millennium Development Goals that will continue for another 36 months. The organization claims the country has already achieved a 94 percent improvement in literacy, with Mexico City at the top with a literacy rate of 99 percent.

The project hopes to construct additional sustainable schools built around the indigenous style of living. It also aims to ensure that national education policy will evolve according to education for sustainable development in the coming years.

The state of Chiapas serves as a prime example of the possibilities of success through education interventions. Many programs continue to seek progress in indigenous Mexican communities while citing Chiapas’s quick literacy improvements in the past decade.

The U.N. states that the Declaration on the Rights of Indigenous Peoples will continue to be utilized in the country for support of indigenous rights.

Once the country with the lowest education scores, according to OECD, signs of continued progress for education in Mexico persist.