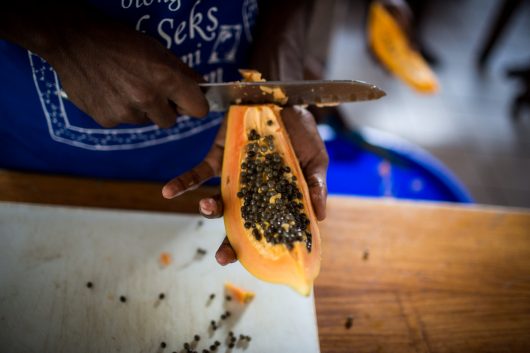 Vanuatu is a developing nation of islands in the Pacific Ocean. Agriculture is an important industry for the country, while fishing is an important food source for the people who live there. There are many factors impacting hunger in Vanuatu. Some are better understood than others, and some factors are universal in developing nations. Below are ten facts that help describe hunger in Vanuatu.

Hunger Causes Mineral Deficiencies and Lack of Macronutrients
Around 38% of children under five and 24% of women suffer from anemia. Twelve percent of the population gets less than half the recommended amount of Vitamin A. Vanuatuans do not always get enough macronutrients such as protein or calories either.

Malnutrition Leads to Unhealthy Kids
In 2013, the World Health Organization reported that 28.5% of children under five had low heights for their age, 10.7% were underweight, 4.4% had low body weights for their heights and 4.6% were obese. Obesity, stunting and wasting can all be connected to poor nutrition and helps explain how these are all seen in developing nations like Vanuatu.

Noncommunicable Diseases are Rising Because of Malnutrition
Noncommunicable diseases, which include cardiovascular disease and diabetes, account for 70% of deaths in Vanuatu and can be linked to poor nutrition. As global trade increases, Vanuatuans have more access to processed, high-calorie, high-salt and high-sugar foods. These foods are typically less expensive than healthy options and are becoming more common as a result.

Climate Change Exacerbates Hunger in Vanuatu
As in other developing nations, climate change has a large impact on food security, in part because of these countries’ inability to adapt. Vanuatu has been ranked in the top five countries for climate change impact.

Cyclone Pam, which struck Vanuatu in 2015, may be a result of climate change-induced weather patterns. This cyclone destroyed banana and coconut trees while stripping citrus and avocado trees. It also killed livestock and impacted the fishing industry by damaging equipment and coral reefs as well as killing fish stock. Eighty percent of Vanuatuans feed themselves through their agriculture.

Hunger in Vanuatu is More Prevalent in Urban Areas
Those residing in urban areas typically consume fewer calories, iron and Vitamin A. This occurs because people in the countryside have room for farms on their land and can provide their independent food sources. Those in urban areas (who do not have room for farmland) have to pay more for food due to transportation costs.

Households Headed by Women Have Better Nutrition
In homes that are run by women, people are likely to eat more calories, protein, iron and Vitamin A, as opposed to households headed by men. While families led by men are more liable to face hardship, the relationship between gender and nutrient intake in Vanuatu is not currently understood.

Fish Contribute Significantly to Vanuatuans’ Diet
Fishing contributes little to Vanuatu’s economy. Seventy-two percent of households fish. Of those who do fish, 73% feed themselves with their catch, while 26% feed themselves and sell some too. As a result, fishing is critical to food security in Vanuatu.

This fact is another reason why addressing climate change is important. As ocean temperatures rise, coral reefs housing fish may die.

Australia Cares About Vanuatu
Perform an internet search for “Who’s helping Vanuatu” and many Australian websites will pop up. Indeed, most of the reporting on Cyclone Pam was done by Australian news outlets. Between 2016 and 2017, the Australian government gave Vanuatu $69.8 million in development aid. Between 2017 and 2018, they are budgeted to give the same amount. Much of this support is for development not related to hunger. However, Australia allocated $50 million over three years to rebuild the damage suffered by Cyclone Pam.

More than 80 islands comprise the country of Vanuatu. Set in the Pacific Ocean, the country is a favorite tourist spot. More than 12% live in poverty. This fact naturally affects food security. While Vanuatu does not get much of news coverage, there are governments and organizations continually helping reduce hunger in Vanuatu.