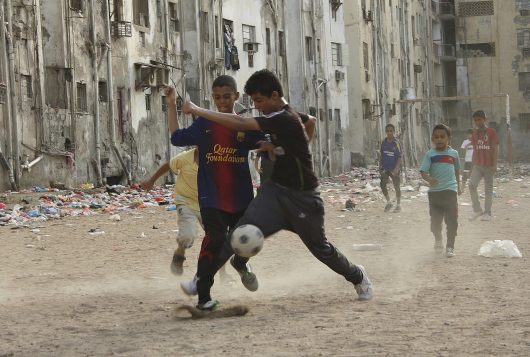 The humanitarian crisis in Yemen is reaching new heights. There is a proxy war being fought between the Sunni Muslim state of Saudi Arabia and the Shiite Muslim state of Iran. More than 10,000 Yemeni civilians have been killed and roughly 2.1 million have been displaced.

According to the U.N., 80 percent of the population is in need of some form of humanitarian aid. There is a water shortage that may completely deteriorate in 2017. There are now 21 million people dependent on international aid to survive.

Factors Contributing to the Crisis

The Houthi uprising began in the wake of the Tunisian civil war in 2011. This was a major security concern for the Saudi government, as it shares its southern border with Yemen. Yemen’s President Ali Abdullah Saleh, backed by Saudi Arabia and the U.S., was forced to resign from office in 2011. This occurred after widespread protests were held in opposition to his illegal business dealing and his amassed $60 billion. A U.N. expert panel stated in a report that, “Many have argued that the country’s spiraling debt and economic problems would be alleviated with a repatriation of these alleged stolen assets.”

Power was ceded to Abd Rabbuh Mansur Hadi in February 2012. Houthi rebels then took control of Sana’a, the capital city, through a string of terrorist attacks. Hadi fled the country.

The humanitarian crisis in Yemen continued to worsen with a growing food deficit, increasing drought and terrorism concerns. Half of Yemen’s population was living below the poverty line, and almost half of the population was under the age of 18 and unemployed. Saudi Arabia led a U.S., U.K., and France-backed coalition in support of Hadi’s internationally recognized government against the Houthi rebels.

Former secretary-general Ban Ki-Moon announced that the U.N. had documentation of widespread violations of children’s rights in Syria that were committed as part of the Houthi child soldier recruitment efforts, as well as the child casualties from the Saudi airstrikes. Saudi Arabia threatened that if it were not removed from the report, they would cut off its funding to the U.N. and incredulously, the threat succeeded. This miscarriage of justice has hurt the U.N.’s reputation as an impartial mediator in the conflict.

War crimes are being committed on both sides as the humanitarian crisis in Yemen carries on. Unfortunately, these crimes will likely continue without reprimand or sanctions as Saudi allies, like the U.S., have vetoed the U.N.’s independent international investigation into these war crimes. This effectively kills any charges against the Saudi’s or Houthi rebels, endangering countless more children’s lives.