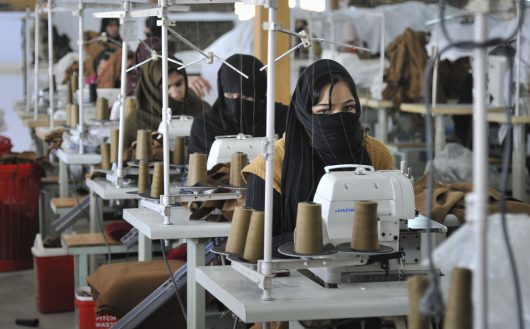 The fashion industry is having a dramatic impact on the environment and on the lives of people around the world, predominantly those in poverty. Fashion can be bucketed into two categories: fast and ethical. To the regular consumer in the United States or in Europe, it might be hard to know the difference between the two.

We are living in a world of fast fashion, a term Merriam-Webster defines as, “an approach to the design, creation and marketing of clothing fashions that emphasizes making fashion trends quickly and cheaply available to consumers.” Some of the large-scale fast fashion brands include H&M, Levis and Nike. With fashion trends changing quicker and fashion seasons getting shorter, cheap clothing is purposely being made poorly in order to not last.

With these big brands producing so much clothing at such a fast rate, there are more and more amounts of clothing going to thrift stores. Thrift stores can’t keep up either, though. What many don’t know is that about 40 percent of donated clothes end up getting baled up and sent to different countries overseas. In New York City, most donated clothes end up making their way to Africa.

Besides the overwhelming amount of tangible fabric leftovers, fast fashion is having a dramatic impact on the people who make our clothing. Garment workers are practically invisible, with 97 percent of our clothes being made overseas in developing countries.

Workers in the fashion industry are exploited; they receive extremely low wages while working in inadequate conditions. About 40 million people around the world (85 percent who are women) create clothes. In 2013, an eight-story garment factory called Rana Plaza collapsed in Bangladesh killing 1,135 people and injuring around 2,500. The average monthly income for a garment worker in Bangladesh is only 68 dollars.

Ethical Fashion is Gaining Visibility as a Solution

With such problematic issues surrounding the fashion industry, it is increasingly important consumers make responsible and sustainable purchases. Ethical fashion has gained popularity as many companies and organizations are adopting fair-trade and other responsible business practices.

The United Nations’ Ethical Fashion Initiative is just one of many such initiatives. Seeing fashion as a means for development, this initiative upholds that, “in all things, people need to come first.” This initiative also stresses the significance of “fair supply chains” and “dignified working conditions” that do not involve “any form of labor exploitation.”

There are many people who put work into creating the things we purchase. There is fast fashion and ethical fashion – it is our choice which one to support.