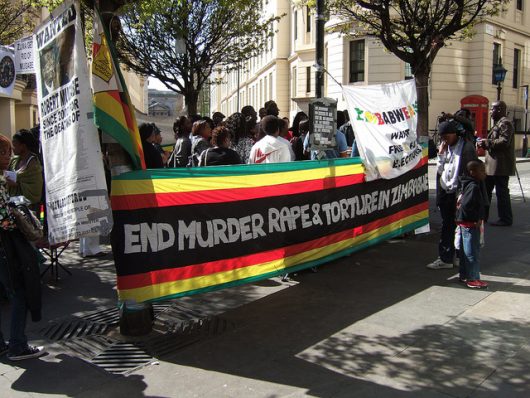 Tensions run high in the landlocked southern African nation of Zimbabwe. Protests and civil disobedience exploded in recent years in response to the government’s persistent incompetence and malpractice. Worse still, the government in Harare responded to the mass demonstrations with violence and unethical treatment, worsening the state of human rights in Zimbabwe.

Today’s tumultuous wave of popular dissatisfaction is tied to the ruinous drought in the region, which threatened food security for millions and contributed to shortages of cash. With the government largely unable to prevent mass starvation nor compensate civil servants, the Zimbabwean people fear another period of national suffering.

Only nine years removed from the beginning of the crippling 2008 economic crisis, Zimbabweans directed their anger at the government for its failure to develop the country and its disregard for human rights. These grievances only worsened with the government’s retaliatory agenda, which resulted in the unlawful treatment of activists and others.

Protesters in Zimbabwe often encounter police violence and arbitrary imprisonment, and many are charged with false accusations of criminal activity. Even non-protesters are arrested and imprisoned for days, demonstrating the government’s blatant disregard for the rule of law and due process.

Also, freedom of expression in Zimbabwe is incredibly limited, showing that human rights in Zimbabwe are far from meeting acceptable standards. Police forces in Zimbabwe frequently deny the media the right to cover protests, and many journalists are arrested and detained for indeterminate amounts of time on false charges. Violence towards the media is common as well. One journalist covering protests in Harare was even clubbed by riot police.

The government’s general disregard for human rights reflects the influence of Zimbabwe’s President Robert Mugabe. Mugabe has been in control of the government for over three decades, during which time he did little to modernize Zimbabwe’s social and economic institutions. Mugabe uses political violence and unlawful seizures of personal property to further his own interests, tyrannical behavior that is common practice for the government.

Under the Mugabe regime, human rights in Zimbabwe are vulnerable to repeated, malicious attacks. When people remain submissive, they suffer from economic, social, and political destitution. When they speak out, they experience brutal reprisals.

Despite its long history of transgressions, the current regime will not last. At 93 years old, the geriatric President Mugabe’s days are very limited. Hopefully, Zimbabwe can peacefully oust out Mugabe’s pawns and develop a stable economy and strong human rights protections. With enough support from the U.S. and other countries, the people of Zimbabwe can evade another economic crisis and inch closer to a truly egalitarian democracy.