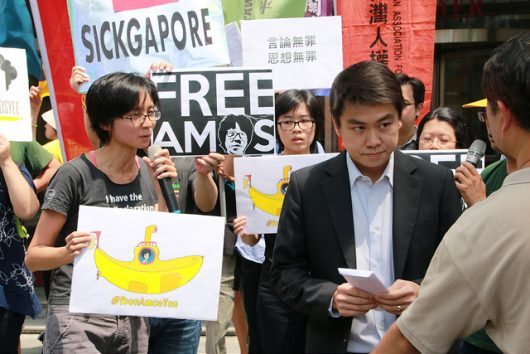 Singapore is a highly developed nation with a thriving economy. This being said, human rights in Singapore still have a long way to go. Freedom of expression and peaceful assembly are still restricted by the government on the basis that they undermine national security and religious and racial harmony.

Singapore’s Media Development Agency (MDA) requires all online news sources to register themselves and subjects them to regulation by the government. They are prohibited from receiving any foreign funding, and the government also limits the circulation of any foreign news sources in the country. This is supposedly so that the organization can maintain religious and racial harmony and national security.

In 2009, Singapore passed the Public Order Act, which requires a police permit for all group assembly in public. While this is similar to the policy in the United States, where one must apply for a protest permit, the grounds for denial of the permit in Singapore are very broad. There are far more applications that are denied than accepted, severely limiting the right to free assembly. Singapore does have a “Speakers’ Corner” which is open for rallies and protests—as long as they don’t touch on racial or religious issues, and as long as they are only Singaporean citizens; foreigners need a police permit to participate.

In 2014, Prime Minister Lee Hsein Loong sued an activist and blogger for defamation. The blogger, Roy Ngerng Yi Ling, was fired from the private hospital he worked at, and the courts ended up ruling against him. This was an open denial of free speech on the part of the Singaporean government.

Even as recently as May 2017, Singapore has continued to limit freedom of speech. Prime Minister Lee Hsein Loong’s nephew, Li Shengwu, made criticisms of the country’s leadership in a private Facebook post. Since then the government has been pushing him to sign an apology letter and to admit to contempt of court, but Mr. Shengwu refused and continued to point out the human rights violations the Singaporean government was committing.

Singapore has committed a number of other human rights violations, but these are very basic rights its citizens lack. Much reform is needed to make Singapore a more equal and free nation, but activists and citizens are hopeful for change in the future. As unfortunate as it is that certain human rights in Singapore are often denied, most countries started with many human rights violations before realizing the importance of granting their citizens these rights. Singapore is hopefully on its way to doing so as well.

Positive Planet: Lending to the Greater Good WHO and LSE: Reducing Suicide in Low-Income Countries
Scroll to top