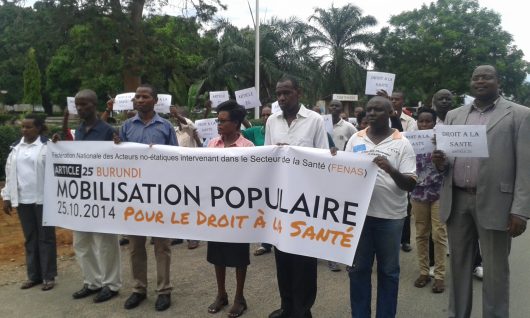 Since the political upheaval of Burundi’s 2015 elections, the Imbonerakure, the youth wing of the ruling party, continues to pose a direct threat toward human rights in Burundi, as confirmed by recent rape chants caught on video.

As 21,000 Burundians fled to Rwanda in 2015 due to the Imbonerakure, many believe that the presence of this youth wing serves a source of intimidation and violence to quell the opposition to President Pierre Nkurunziza’s controversial third term.

While a two-term limit exists in Burundi’s national constitution, the ruling party claimed that Nkurunziza’s first term failed to count since he was originally elected by parliament, causing an upheaval of opposition that still prevails today.

Since the election, Imbonerakure members continue to rape, torture and kill Burundi citizens. Investigators have revealed that the targets of the youth party are most often women whom they believe to have ties to anti-government supporters, including the wives and daughters of opposition members.

The United Nations’ mission in Burundi described the group as “one of the major threats to peace in Burundi and to the credibility of the 2015 elections as they are responsible for most politically motivated violence against the opposition.” Recent action on the part of the youth wing has shown their threats to have only become worse.

On April 1, 200 members of Burundi’s ruling party youth league marched through the center of Ntega, chanting, “Impregnate the opposition, so they give birth to Imbonerakure.  There are lots of girls. Impregnate them, Imbonerakure!”

While this song serves as the reality for many of Burundi’s people, one man decided to file a complaint with the police after two policemen raped his wife. As a result, this man was beaten by Imbonerakure members and told by the police that he was “staining the image of the security forces.”

As the youth league continues to violate human rights in Burundi, the people live in fear, as they are afraid to speak out knowing that President Pierre Nkurunziza’s government makes no effort to prosecute or provide consequences for the Imbonerakure’s crimes.

While the Imbonerakure continue to impose themselves as a threat to the nation, is clear that human rights in Burundi will not be maintained until government officials take action to address these heinous acts of brutality.

Common Diseases in Mozambique Hunger in Turkmenistan
Scroll to top