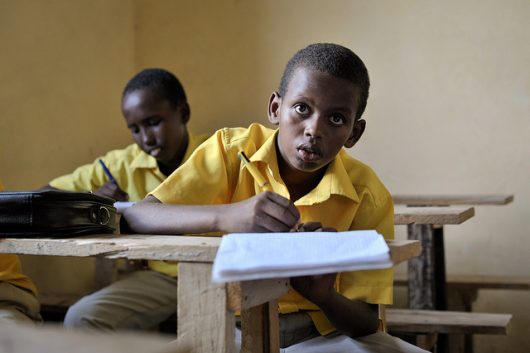 In addition to the moral reasons for reducing global poverty, more investment in foreign assistance benefits both domestic and international economies. To understand how to improve the economy by reducing global poverty, some particular factors must be considered. These are access to education, infrastructure and finance. All of these factors stimulate an economy.

Global poverty reduction boosts the global economy. Education plays a substantial role in this by closing the gap between the world’s rich and poor. According to Brookings, studies show that “the education gap between kids from poor and rich families has increased substantially, making it difficult for children from poor families to close the income gap between themselves and children from rich families.” It is becoming more and more apparent that education bridges these divides and helps accelerate economic growth.

Education is in the best interest of countries giving foreign aid. Education-based programs can give children the skills they need to complete degrees for well-paying jobs later in life. The comprehensive skill level of a labor force is a leading element of local job and wage growth. Growth in job numbers helps an economy to prosper. A generation with access to education will likely become a group of entrepreneurs more likely to practice equitable governance and improve not only their own country’s economy but the worldwide economy. Furthermore, advances in human development promote economic growth.

It is in the best interest of first world countries to use their foreign aid budget to help lessen the growing worldwide gap between rich and poor. An influx of foreign aid helps promote a strong and stable economy for all. As more people in developing countries are given the opportunity to lift themselves out of poverty, it creates new consumers of U.S. products. The U.S. already benefits from an about one percent investment in foreign aid from the federal budget, as more than half of U.S. exports now go to developing countries. Every prosperous countries should consider how to improve the economy by reducing global poverty.

Even with trillions of dollars being spent on programs, there is still a long way to go in order to get the entirety of the global population above the poverty line, which is $1.90 per day. More than 700 million people are living at or below this level. Increasing not only work rates, but the amount of schooling completed is thought to be a successful approach. There are solutions to these emerging problems; education and an influx of jobs are what is going to create the most change and prosperity.