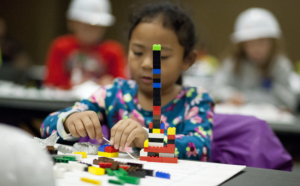 Small towns do not often get credits for great deeds, but some of the best things in life come from the most unexpected places. This is the case for the Happy Factory which began in the small town of Cedar City, Utah. What started out as a hobby for the founders after retirement has grown to help children in poverty, children dealing with sickness and children living in the midst of violence. These toys have brought happiness to many when everything else seems so dark. The hope of toys could mean all the world to every child they reach.

Charles and Donna Cooley retired from Southern Utah University in 1995, where Donna worked as the head cashier at the university and Charles worked in the sports department. After retiring Charles took up woodwork, making animal cut-outs which were donated to Primary Children’s Medical Center after Donna painted them.

The couple saw the hope of toys for the children who received them and felt so much happiness. The Cooleys knew they had to continue their work. The hobby became a full-time project and job. The happiness that the Cooley’s toys brought to children inspired the name, “Happy Factory.” Charles Cooley died in 2011, but Donna and thousands of volunteers continue this work today.

From its humble beginnings, the Happy Factory has grown immensely. The motto of the founders is “We may not be able to make a toy for every child in the world that needs one-but we’re going to try.” And their efforts have made a sizable impact in the world.

All of the organization’s work that goes into creating the toys is done by volunteers and the wood that is used to make them is donated and repurposed. The toy donations have expanded from the original local hospital. Since 1995, over 1.5 million toys went to different organizations and countries all over the world. In 2017 they made donations to the ravaged communities of Iraq and Afghanistan with help from the U.S. military.

The charity has also moved towards making steam shovels, which have been sent far and wide, according to its website. The conception of this came when the Happy Factory’s owners visited a hospital in Salt Lake City. The hospital needed to acquire specialty wooden items that would help children dealing with bone, muscle and joint difficulties. The physical therapist at the hospital called Charles and when asked about it he promptly asked for plans.

These toys have made a particular impact on disabled children. They have stimulated the children to do things they thought were previously impossible. In some places, this is the only form of therapy available for children. Since their introduction to Happy Factory’s production line over 2,610 of these steam shovel toys have been delivered all over the world.

This organization is giving the hope of toys and making an impact in the lives of children, but also in the hands that take the time to make the toys, as well as the people that deliver them. Every helping hand and penny makes a difference. In the words of Robert Workman, a man who helped inspire Happy Factory, “One toy makes a drop in the bucket and it’s a pretty big drop for the child that gets it.”