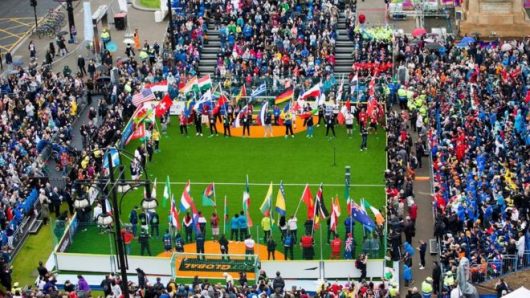 In 2001, Mel Young created the Homeless World Cup as a way to celebrate individuals from around the globe who have overcome poverty. Young has dedicated his life to fighting homelessness in his homeland of Scotland and the world beyond.

He summarizes his goals for the event: “…we hope to educate the public on the homelessness crisis, with the aim of increasing funding, volunteering, optimism and gestures of goodwill- creating impact and big change”.

The organization covers food and accommodation costs for the players, so even after teams are knocked out of the tournament they are still welcome to spectate and enjoy the rest of the event.

For many players, the Homeless World Cup serves as an escape from the struggles of everyday life as well as a chance to travel to another part of the world. Young believes players are empowered by the dedication, responsibility, and teamwork involved in the game. He also believes that playing sports is a great way to improve both physical and mental health.

The event also works to combat the uncomfortable divide that often separate the homeless and non-homeless communities. By making homeless individuals the stars of the event, typically negative stereotypes surrounding homelessness may shift into a more positive light.

Aside from honing their football skills, players gain valuable skills which can be applied to life outside of the game. The Homelessness World Cup has helped past players overcome addiction, boost self-esteem, and improve their resumes.

Homeless World Cup participants typically retire from football after the Cup, as individuals are only permitted to play once. The hope is that players will have jobs and homes lined up after the event and will no longer be considered homeless. The Homeless World Cup is meant to be a celebration for those who have overcome obstacles and hardships and are ready to enter a new chapter in their lives.

In the words of The Huffington Post’s Kim Samuels, “we have a long way to go to conquer homelessness and the isolation that so often accompanies it. But every goal at the Homeless World Cup brings us a little closer to achieving that larger goal of ending homelessness and fostering inclusion”.

Norwegian Refugee Council: Fight Against Crisis in Fallujah What are the Top Diseases in Angola?
Scroll to top