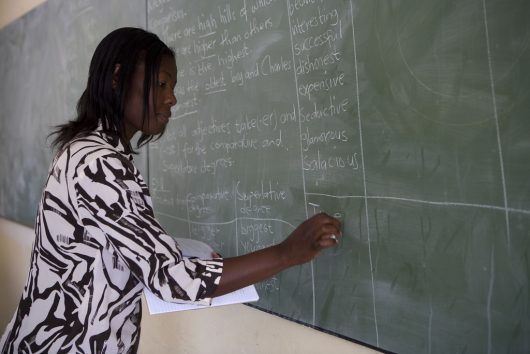 Real progress in improving education in Namibia did not occur until after their Independence Day on March 21, 1990. The system prior to 1990 was ridden with apartheid generation policies that encouraged institutional racism across all levels of government.

The constitution of the new government guaranteed the right to education for all of its citizens. Specifically, free primary education, grades 1-7, and access to secondary education contingent on the success of the student and ability for that student to pay tuition. Along with guaranteeing education as a right, the new constitution abolished the apartheid-style funding system that had previously existed.

Between 1990 and the early 2000s, the country made great strides in terms of improving education. Enrollment in primary education increased from 60 to 95 percent, there was a 30 percent increase in the teaching workforce, and 3,000 new classrooms were built. But there were still questions about the quality and relevance of the curriculum, the shortage of overall schools, the availability of qualified teachers for those schools, and a lack of enrollment in secondary education due to it being cost prohibitive.

These items were taken into consideration by the government and they responded with the Education Act of 2001 that extended free tuition to all citizens seeking secondary education (up to 12th grade), along with performance standards required to move on from grade to grade.

Even with these increased investments in education, the issue of having quality teachers still was not solved. A UNICEF report that assessed the quality and success of the Namibian education system correlated increasing grade repetition rates to low teacher skills and content knowledge. There is also a lack of consistency from school to school adhering to the national performance standards.

Increasing funding can only do so much, and education in Namibia is at its capacity. It has serious economic concerns that limit the available funding for education spending. Currently, 20 percent of GDP is being spent on education which is far higher than the United States at 6.4 percent or even the top ranked education system in the world, Finland, at 7.2 percent.

Education in Namibia and Namibia as a whole is dependent on economic development. Its economy is not well-diversified and is far too reliant on the mining industry. Global fluctuations in its main commodity exports equate to volatility in the labor market. Unemployment currently sits at just under 30 percent.

A report by the Journal of Economic Structures identifies that Namibia is unique compared to other developing countries, though. It has a positive current account balance, which means there are more savings than investment. Currently, a greater percentage of savings are being exported to foreign markets. The Journal states “if interesting investment opportunities are available, the country has to fund through its own domestic savings.”

The Namibian government is aware of this and wants to use this knowledge to achieve a goal of eradicating poverty by 2025 through investment in local communities. The President of Namibia, Hage Geingob, states this will be achieved through investment in social safety nets, training and skills development, and employment through community development activities.