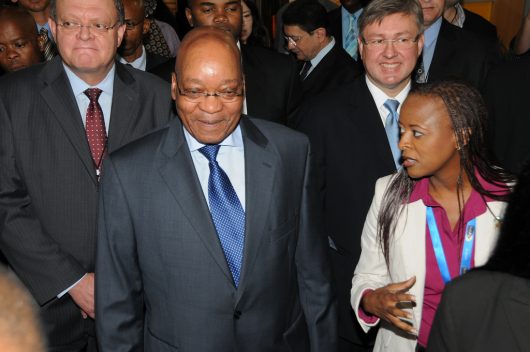 South Africa was once the most credible and economically successful country in Africa, an example for evolving African democracies. However, it is now a country tainted with corruption. Statistics reveal that the corruption in South Africa has increased over the years. According to South African Social Attitudes Survey, the proportion of citizens who believe corruption prevention should be a national priority doubled from 14 percent to 26 percent between 2006 and 2011.

Surveys given to South African citizens reveal that 66 percent of citizens believe people working in law enforcement are corrupt, while 37 to 38 percent believe that home officials, officials awarding public tenders and politicians at the national level are contributing factors to corruption in South Africa. When asked why corruption is so prevalent, more than half of those surveyed stated that it is due to the government’s inaction on making it a national priority. Additionally, 33 percent believe that criminals are either given light sentences or not punished at all. Interestingly enough, 30 percent of individuals surveyed state that public money is also not being accounted for.

More recently, an organization named Corruption Watch was created. The organization investigates corruption accusations and gathers and analyzes information to identify patterns and hot spots of corruption. The organization provides a platform for reporting corruption and primarily relies on self-reporting. Examples of corruption in South Africa can be linked to the current president’s misuse of government funds and problems relating to the falsification of work and educational experience.

In regards to corruption in the public sector, South African president Jacob Zuma is one of the reasons why it is so prevalent. Since taking office, Zuma has been surrounded with constant controversy for his misuse of government funds. Reports from the Constitutional Court of South Africa show that Zuma has spent $20 million of public funds to improve his private residence. Although he defended the upgrades as required security precautions, the improvements included an outdoor pool, amphitheater and more. In May 2016, the Independent ran an article on how Zuma purchased 11 new cars over the past three years for his various wives. The money was supplied from the official budget of the police. It was also confirmed that the president planned to purchase a new presidential jet months after the finance minister delivered a draconian budget.

In addition to presidential scandals, several government officials have been caught falsifying their qualifications. In various cases, these officials lacked the qualifications required to hold and perform duties related to their position. For example in 2014, the African National Congress (ANC) spokesperson, Carl Niehaus, was caught being deceitful about the qualifications on his resume. He claimed to hold a Ph.D. from the University of Utrecht in the Netherlands, which was later determined to be false.

Corruption in South Africa has denied millions of citizens the necessary resources to escape from poverty. Poverty in South Africa is paradoxical. It is a country that is rich in natural resources, yet six million South Africans are living in poverty due to the mishandling of governmental funds, according to Oxford University.

According to José Ugaz, chairman of Transparency International, “Corruption creates and increases poverty and exclusion. Corruption in South Africa allows public officials to live lavishly, while millions of citizens are deprived of their basic needs to things such as food, healthcare, education, housing and access to clean water and sanitation.”

In 2016, Corruption Watch launched a public awareness campaign to guarantee that the Office of the Public Protector remains a foundation for South Africa’s democracy. The public protector role was created to ensure citizens can appoint someone to look after the country’s affairs without bias in order to decrease corruption.

South Africa has taken an initiative to tackle corruption issues through joint efforts with organizations such as Corruption Watch and many others. Ways to prevent corruption can be seen through education, changing governmental procedures, bridging the gap between the government and citizens and instilling governmental transparency.

Interestingly, South Africa has 13 public sector agencies that play a role in combatting corruption. Organizations such as National Anti-Corruption Task Team were established to coordinate the functions of these agencies. South Africa also has dedicated policies, standards and legislation to tackle corruption through both criminal and civil action. Members of the governing body should be reminded that they have a right to vote and have their voices heard. Voting is one way in which citizens can take a stand in putting the right people in power.

Corruption in South Africa can be reduced by increasing direct contact between government and constituents. Although South Africa has struggled with corruption in the past, the country’s efforts toward reform are visible.

The Unique History of Education in Namibia Oxfam Launches New Project with Celebrity Voices: “I Hear You”
Scroll to top