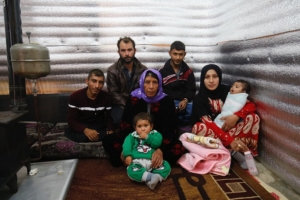 The Syrian refugee crisis has been ongoing for more than eight years since the civil war that started in 2011. More than 5 million people have fled Syria, while many more were displaced within Syria itself. Externally, Lebanon, Turkey and Jordan have the highest proportion of Syrian refugees in the world. Since refugees often try to live in urban areas for better employment opportunities, they frequently struggle with financial resources and end up living below the poverty line. In response, domestic and international organizations are helping Syrian refugees after arriving in each of these three countries.

As of June 30, 2016, Lebanon had the most Syrian refugees relative to its population, which was about 173 refugees per 1,000 people, or a total of 1,035,700. Lebanon also hosts a high number of refugees compared to its GDP, equating to 20 refugees per $1 million in GDP. While Lebanon hosts a large number of refugees, it is struggling to provide for them. There are around a million Syrian refugees in Lebanon, 70 percent of whom live below the poverty line. These refugees often have little to no financial resources, which leads them to live in crowded homes with other families in more than 2,100 communities.

One organization helping Syrian refugees in the country is the Lebanese Association for Development and Communication (LADC), which emerged to help both Palestinian and Syrian refugees. Its projects range from community-based projects to aid projects with both local and more than 500 international volunteers helping to establish more than 6,500 beneficiaries. One of its projects was the Paradise Wall, a community art project to smooth the integration process between 120 Syrian and Lebanese children by asking them to work together creatively to produce a wall full of designs.

Turkey hosts the largest number of registered Syrian refugees – currently at 3.3 million. Authorities claim that there are more than 3 million Syrian refugees, but that they have not registered. This is because they see Turkey as a transit country or fear deportation. The fear of deportation comes from the fact that Turkey offers temporary protection status to Syrians instead of internationally-recognized refugee status. This increases the likelihood of Turkey deporting the refugees while avoiding the risk of receiving international renouncement for doing so. Most refugees attempt to settle in urban areas in these countries, as opposed to refugee camps where only 8 percent of registered Syrian refugees live.

In Turkey, the UNCHR, EU and WHO have come together to fund the Association for Solidarity with Asylum Seekers and Migrants (ASAM), which is a multi-regional organization that does a wide variety of work to help Syrian refugees after arriving in Turkey. It has many projects ranging from legal counseling to psycho-social support for children through playful activities. One of its projects titled Women and Girls’ Safe Space emerged to offer training sessions on women’s reproductive health.

To deal with this, the Jordanian government has initialized formal processes to help them escape poverty. In 2017 alone, the country issued 46,000 work permits so that Syrian refugees work. Recently, in collaboration with UNHCR, the International Labor Organization (ILO) established an employment center, The Zaatari Office of Employment, in the biggest camp for Syrian refugees. By August 2017, around 800 refugees benefited from this center by registering official work permits in place of one-month leave permits.

While the Syrian refugee crisis is still ongoing, it is important to note that many are helping Syrian refugees to settle and integrate into their host societies. Many countries from all over the world are starting to resettle the refugees within their borders to lift off the burden of poverty and overcrowding in certain areas. People often recognize Lebanon, Jordan and Turkey for their willingness to take in large numbers of Syrian refugees, but this must not erase the work a variety of organizations are doing to help refugees after arriving in their new homes.

Financial Inclusion Through TechnologyBeca 18: An Educational Program that Brings Hope
Scroll to top