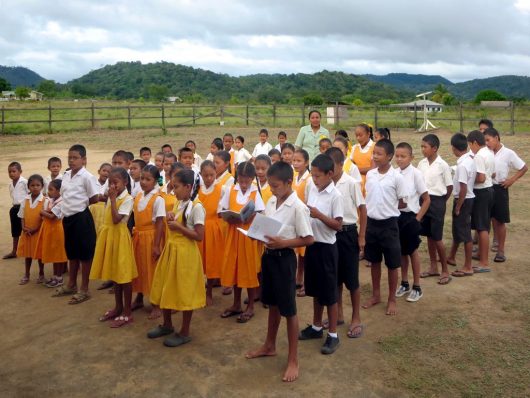 On April 28, 2017, the World Bank approved a $13.3 million credit toward the Guyana Education Sector Improvement Project. The project aims to improve various aspects of school operations at the primary, secondary and tertiary levels in Guyana.

While school enrollment is rapidly expanding at all levels, many Guyanese students still fail to meet baseline standards in math or English. In the 1970s, Guyana faced major economic decline and public schools received little funding. Many teachers left the country in order to pursue higher-paying positions, leaving schools with untrained and inexperienced teachers.

The economy began to improve in the 1980s as Guyana diversified its exports. Several education-focused aid programs began implementation. Approved by the World Bank in 1989 and completed three years later, the Primary Education Improvement Program of Guyana aimed to train more teachers and provide better physical facilities at the primary level. From 1987-1992, UNESCO sponsored the Equal Opportunity for Girls in Technical and Vocational Education, which involved the training of teachers and female students in the industrial arts at the secondary level.

These and similar programs that ran at the same time had mixed successes. Girls studying the industrial arts program scored better than their peers on standardized tests, and a significant number went on to take courses in the industrial arts at the Guyana Industrial Training center. However, despite the amount of work that has been done to sufficiently train teachers in different disciplines, the Cyril Potter College of Education, Guyana’s main teacher-training facility, simply cannot meet primary and secondary schools’ demand for teachers.

Taking this into account, the Guyana Education Sector Improvement Project will mainly work toward developing new curriculums at the primary and secondary levels and training 6,500 teachers in these curriculums. As a lack of facilities continues to pose a problem, the project will also build a new facility to house the University of Guyana’s Faculty of Health Sciences.

Tahseen Sayed, the World Bank Country Director of the Caribbean, notes that “[q]uality education is one of the strongest instruments for reducing poverty.” As Guyana’s GDP has continued to rise dramatically every year since 2005, the Guyana Education Sector Improvement project will hopefully reinforce this economic growth–and vice versa.