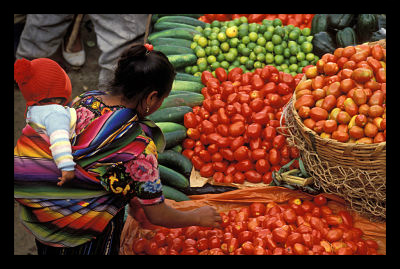 Guatemala has one of the highest rates of child malnutrition in the Western Hemisphere and the sixth highest in the world. Half of all children under five are considered severely malnourished. Malnutrition is highest among the indigenous population and nearly two-thirds of indigenous children do not get enough to eat. In some of the poorest villages that number rises to 90 percent.

This is significantly higher than nearby Honduras and Nicaragua, both of which are significantly poorer than Guatemala. Haiti is the poorest country in the Western Hemisphere and the average Guatemalan earns four times more than the average Haitian, but Guatemala’s childhood malnutrition rates are twice as high as Haiti’s.

The reason child malnutrition rates are so high is largely the result of high levels of income inequality, some of the greatest in the world. Another primary factor is  neglect toward indigenous communities on the part of the central government.

In recent years the situation has become worse due to a prolonged drought in many parts of the country resulting in lower crop outputs. This has led to food shortages and higher prices for those who are already too poor to put enough food on their tables.

Child malnutrition is both the result of and a primary cause of extreme poverty, it creates a sort of poverty trap. When children grow up malnourished, their education suffers and they are more likely to drop out of school and have trouble finding employment. They are also more likely to suffer from psychological and physical health defects.

Studies show that high levels of child malnutrition have stunted the growth of Guatemala’s indigenous population. Indigenous Guatemalans are on average several inches shorter than indigenous people in southern Mexico who belong to the same indigenous group and share similar physical and genetic features. The difference is that Mexico has much lower levels of malnutrition.

Due to low rates of tax collection and entrenched corruption, it has been difficult for the Guatemalan government to come up with the resources to tackle the problem. But it has begun to address it and work towards a solution.

Partnering with foreign donors, the Guatemalan government has instituted a program aimed at providing food supplements to some of the country’s poorest villages. The EU has provided 186 million euros (about $200 million) in development aid to Guatemala. Progress is being made and several villages are benefitting, but corruption is hampering the program. Many Guatemalans accuse the government of embezzling much of the money for personal use.

USAID is funding farming cooperatives aimed at boosting income and food security. Several villages that have benefitted from the programs report better crop yields, higher levels of income and reduced levels of malnutrition.

But despite these important victories, there is still a long way to go. Most villages continue to struggle and have yet to benefit from any assistance. But progress is being made and things are moving in the right direction.