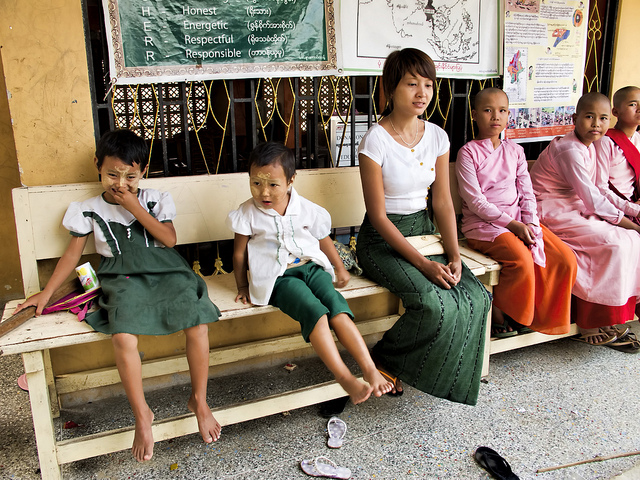 The education of girls and women has been found to be of paramount importance for the success of individuals, communities and nations, leading to increased efforts to improve girls’ education in Myanmar, among other countries. Women who receive a higher level of education generally receive higher pay and tend to have fewer health problems. Additionally, education increases job opportunities for women, positively impacting them as well as employers.

In Myanmar, however, many girls (and boys) do not complete their education, with many students dropping out once they reach high school. During the 2009-2010 school year, 42 percent of boys and 44 percent of girls between the ages of 14 and 15 were no longer attending school.

One of the main reasons students leave school is because their parents can no longer afford it. According to UNESCO, public schools in Myanmar do not charge tuition fees, but “hidden costs, such as school supplies and transportation, make them unaffordable for many.” If parents can only afford to send a few of their children to school, girls are more likely to stay at home.

In addition to being less able to afford school, poorer families are more likely to see “work as a better long-term option for their children,” particularly if the school is not providing high-quality education, according to a UNICEF report. They may also need their children to work in order to help support the family. During the 2009-2010 school year, 85.5 percent of children from the richest households attended secondary school, while only 28.2 percent from the poorest households did.

Furthermore, lack of interest has been found to be a common reason for not completing secondary education. This could be due to quality-related issues if parents believe that the school curriculum is not preparing their child for future employment. It could also reflect incidents, including bullying and gender-based violence, that children (girls in particular) drop out of school to avoid.

While these are continuing problems that make advancing girls’ education in Myanmar difficult, some significant improvements have been made, most notably in achieving gender parity in enrollment in primary, middle and high school. By 2010, girls comprised approximately 50 percent of students at each level.

Additionally, according to a U.N. report, girls who were able to complete high school and take the Matriculation Exam, which is “both a high school completion exam and a university screening exam,” passed at higher rates than their male counterparts. In 2012, 55 percent of exam takers and 58 percent of students who passed the exam were female.

Even more striking is the significantly greater enrollment of women in higher education institutions in Myanmar. In 2012, 59 percent of undergraduate students, 80 percent of master’s degree students and 81 percent of Ph.D. students were female.

There are a few explanations for this phenomenon. First, boys have a greater likelihood of being employed immediately out of high school, and therefore may not feel the need to enroll in higher education. Second, more girls than boys become teachers, a profession for which higher education is required. They are also more likely to become professors; in 2012, 82.6 percent of higher education academic staff members were women.

As girls who are able to receive a good education are becoming academically successful and enrolling in undergraduate and graduate programs, the next steps in Myanmar are to improve girls’ access to education and ensure their education is high quality. Ideally, the number of women who are passing the Matriculation Exam and attending higher education institutions will then continue to increase as well.

Girls’ education in Myanmar is a continuing priority for the nation’s leaders and United Nations organizations, including UNICEF, which has been active in Myanmar for more than 60 years and plans to continue working to bring education to all children in the nation.