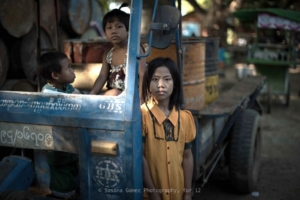 Myanmar is located in Southeast Asia. Thailand borders it from the south while India borders it from the west and China from the east. With its location, one might think Myanmar won the geographical lottery; it has so much potential to be an economic power in the region. However, Myanmar continues to be riddled by poverty and therefore remains one of the poorest nations in the region.

In fiscal year 2013/2014, Myanmar’s population was 51.4 million, with a GDP of $56.8 billion. Based off this number, the country’s per capita CDP was $1,105—making it one of the poorest in the entire region. Furthermore, according to the World Bank, nearly 37.5 percent of the population is currently living in poverty.

It has one of the lowest population densities in the region. The land is resource-rich and perfectly suitable for agriculture and, therefore, over half the population attribute agriculture as their main source of work. The next greatest form of work is found in wholesale, retail trade and repairs, in which 15 percent of the population take part.

Most of the poverty found in Myanmar is attributed to three different things. First is that the poor are stuck in situations that have no exits. These are the ones who were initially involved in agricultural, mining, construction or trade, whose employment was negatively affected by the loss of markets—and therefore leading them to become chronically poor. Nearly 45 percent of the population own land and rely on it for work.

Second, poor distribution of labor contributes greatly to poverty. In Myanmar, some people are underemployed—those working less than 44 hours per week—while those who are employed work too much. Of those who are employed, collectively the nation works 60 million hours each week, meaning that if labor hours were redistributed, it could potentially create 1.34 million additional full-time positions for those who are currently unemployed. Furthermore, underemployment shows that workers are receiving too low of a return despite the high output of work. This could be avoided if productivity, and therefore wages, were increased.

Third, many of the people in Myanmar rely on agriculture for work, but they consider themselves to be at the mercy of factors that they actually have control over. Such factors include weather-related causes such as droughts or floods and pests that destroy their plants. Currently, such misfortunes affect about eight percent of agricultural outputs each year. Fortunately, technological advances are currently widely available to prevent and mitigate the effect of these losses. Therefore, investing in spreading knowledge and getting farmers properly equipped would be the biggest work left to do to increase agricultural outputs each year.

Since transitioning into a democratic government from an authoritarian regime, the government has pushed policies to bring economic reform. In the fiscal year of 2013-2014, Myanmar’s economy had grown nearly 8.3 percent. However, it has been primarily driven through the construction, manufacturing and service sectors. In order to thoroughly combat poverty, Myanmar cannot leave out the millions of the poor who rely on agriculture and must help further develop their trade through investments.