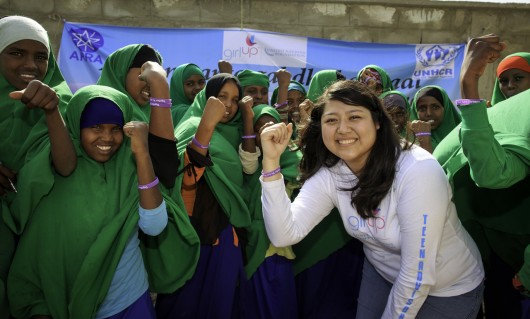 Sydney Faler and Molly Foulkes of Dundee-Crown High School in Illinois started the Girl Up Dundee student club at their school with the hope of helping girls in need across the globe.

The club is a member of the U.N.’s Girl Up campaign which aims to help girls have access to education, health care, safe living conditions as well as social and economic opportunities. The U.N.’s program helps girls in Guatemala, India, Malawi, Liberia and Ethiopia, which are among the toughest places for girls to live.

In the beginning, Faler and Foulkes wanted to do something positive, but they were not sure how to make a difference. Inspired by Emma Watson’s U.N. speech on gender equality, they decided to start the club as a way to collect support and resources for girls.

Foulkes said, “It’s a way for me as a high school student, where I don’t really have that voice, to be able to impact something globally.”

Their sentiment proved to be a common one, as the club started with 35 members and has more people joining every week. In the digital age, students seem more aware of problems in the world and they wish to have a positive impact.

Foulkes said that “we’re becoming a more globalized nation and world. It’s important to realize there are so many more people out there than just our community.” With the planet becoming smaller due to everyone connecting through the internet and social media, issues that were previously unknown are now being brought to the forefront.

People everywhere are coming together to help each other, as evidenced by the growing popularity of the Girl Up student club, which is just one of 1,000 registered Girl Up clubs in the United States. The U.N.’s Girl Up club is also represented in 51 countries around the world.

So far this year, the Dundee-Crown chapter of the Girl Up student club has raised over $300 for girls in Guatemala. The funds will provide bicycles for girls in Guatemala, so they can get to school safely. With access to education, the girls will likely be healthier, more financially responsible and better qualified for good jobs.

Most Guatemalan girls in the Girl Up-supported regions only receive about three years of schooling. This lack of education means that most girls never learn to read and write. In addition, without access to education, girls are more at risk for early marriage and childbearing, thus continuing the cycle of poverty.

In order to help break the cycle, Faler and Foulkes also plan to host a gala event with local community members so they can spread their message. Foulkes said that “a lot of people don’t really understand what we’re doing.”

They believe that once they inform others, they will reach their goal of raising $500 to help more girls in need. These two high school students’ actions are having positive impacts for girls who desperately need it.