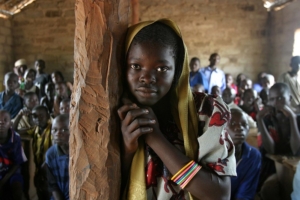 Gender Inequality and HIV is a significant issue in the Central African Republic (CAR). In fact, it is still the primary cause of death in the nation, with nearly 5,000 people dying from HIV/AIDS in 2020. More than 50% of the nearly 110,000 people living with HIV in CAR are not receiving treatment for it. Furthermore, gender inequality within the CAR HIV/AIDS response is ever-present. However, CAR, with the support of organizations like Doctors Without Borders and UNAIDS, is working to make health services for HIV/AIDS more accessible and create a setting where women can get the help that they need, tackling both gender inequality and HIV.

Gender Inequality and HIV in the Central African Republic

The aforementioned statistics align with the social and economic conditions present in CAR. MICS-6 survey data from 2021 indicates that 23.6% of females between 15 and 49 years of age entered into a marriage or union before reaching the age of 15. On top of this, CAR gender-based violence information management system records also reveal 72 instances of rape and 340 instances of gender-based violence during the month of January 2021.

Female genital mutilation is also a common practice in the region, with 21% of CAR women undergoing this traditional yet harmful procedure. Deputy Special Representative of the United Nations Secretary-General in the Central African Republic Denise Brown attributes this violence against women to a combination of “protracted insecurity, violence and humanitarian crises compounded with toxic masculinities and negative social norms.”

The CAR government has conducted an assessment of gender dimensions and HIV response. The results of the assessment reveal that the female members of the population do not receive the full benefit of HIV program advances. The assessment also shows that HIV was prevalent among 15% of female sex workers. Meanwhile, less than a quarter of pregnant mothers obtain “access to prevention of mother-to-child HIV transmission services.”

Acting on these figures, the Central African Republic government has put together an intervention plan for 2021-2023 to assist marginalized women. The plan includes “biomedical and behavioral interventions to promote gender-transformative education and sensitization” to alleviate “barriers to access to HIV services by women, girls and key populations.” In addition, various strategies of care will “promote access to health, social and psychosocial services for women,” with a focus on reducing mother-to-child transmission of HIV. Furthermore, monitoring will allow for accountability regarding gender equality and HIV progress.

The CAR government is not alone in its efforts. Other organizations such as Médecins Sans Frontières, also known as Doctors Without Borders, have also stepped up efforts to help improve access to HIV services in the CAR region. Beginning in 2019 in the capital city of Bangui, this help comes in the form of MSF teams “providing free medical care and psychological support for patients” infected with advanced HIV and tuberculosis complications. The treatment serves as specialized care in an area where HIV prevalence is double the national average. Furthermore, MSF has set up community anti-retroviral (ARV) groups in various areas where designated community representatives can supply ARV drug refills. This endeavor eliminates the burden of transport expenditure on already impoverished people and “time spent in medical consultations.”

Besides providing care, MSF also helps patients care for themselves through self-management. Peer support receives encouragement. This has led to advocacy among community members. The close of 2020 has seen the establishment of “276 community ARV groups in CAR, representing some 2,300 patients.” With the efforts of the government and organizations such as MSF, CAR can make progress in both the realms of gender inequality and HIV.