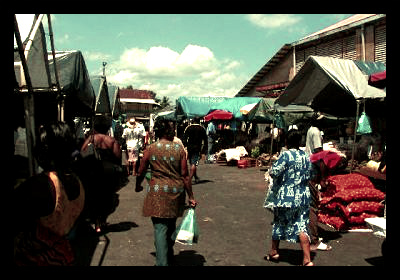 Having become part of France in the 17th century and nowadays administered as part of France just like Aquitaine or Brittany, French Guiana has one of the highest living standards in South America. Interestingly, as a consequent, it is also part of the European Union despite being located in the Americas. In spite of this, the overseas department is one of France’s poorest regions and has long been suffering from youth unemployment.

In the 1990s, street violence with its origin in youth unemployment broke out on the streets. Even nowadays, unemployment in general remains above 20%, while in the rest of France, that figure is, even with the Eurozone Crisis and recent recession, 10.4%, half the regular unemployment rates in French Guiana. The Guianese population has 25 percent of its citizens living below the poverty line, the highest among France’s overseas departments.

The economic situation of France’s overseas departments in the Western Hemisphere, which, aside from French Guiana, also include the picturesque Caribbean islands of Martinique and Guadeloupe, has been the cause of much discontent towards Paris. As living costs rise, the wages remain stagnant and the economies, relying heavily on La Métropole’s subsidization, the people of the overseas departments took to the streets to participate in that most French of activities: les grèves—strikes.

In France, this department also has the infamy of the AIDS epidemic. For every 100 pregnant women, one of them is HIV positive. The department also holds the record for the highest number of children per woman both in France and within the E.U.—four children per woman. Also, terrifyingly, the infant mortality rate of French Guiana is at 11.8 per 1,000 live births, whereas in the rest of France, the average is merely at three.

These are vexing numerical figures for what is supposed to be part of an industrialized and prosperous Western European country.

There is also quite a noticeable discrepancy between the department’s mines and natural wealth and its socio-economics. Despite being peppered with gold mines, rich with natural resources and also being home to the E.U.’s space agency, the aforementioned figures resemble those from certain corners of the underdeveloped world. Perhaps because of the central government’s long negligence due to the department’s distance and its tiny population of only a little bit less than 250,000 people—almost half of that of the much smaller island Guadeloupe—French Guiana has been allowed to languish in poverty and relative underdevelopment.

However, this state of poverty can also be attributed to the department’s own micro-economic character and the fact that its two main economies are the said space agency and gold mining. These two activities can hardly benefit the population at large. Lastly, being part of, though non-contiguous to, a very prosperous nation world-renown for its high quality of life, French Guiana’s abject poverty often gets looked over by the figurative radars of NGOs and aid organizations.

With the large gross domestic product per capita gap between French Guiana and Metropolitan France almost nearing $30,000 difference per annum, the issue of poverty in this overseas department, thus, should demand more attention in order find a solution.

Afghanistan: Past and Future Hunger in Zimbabwe: Real or Unreal?
Scroll to top