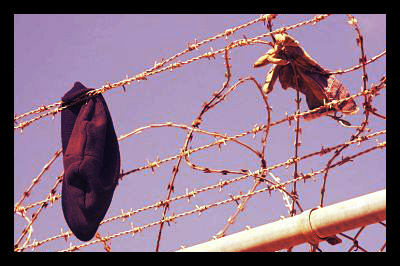 The term Fortress Europe refers to the European Union’s obstructive policies towards immigrants. It is a term that critics employ to highlight many member states’ reluctance and outright unwillingness to welcome migrants seeking a better life within the European Union.

Nowhere is this Euro-jargon more literal in than the Spanish enclaves of Ceuta and Melilla in North Africa. These two cities are where the E.U. borders the African; the cities are located only a few yards apart, they are also where modern day fortresses have been erected.

Heavily patrolled and surrounded with three rows of 20-foot-high barbed wire fences and infrared cameras, the borders of Ceuta and Melilla bare resemblances to the Berlin Wall. In 2005, 11,000 Africans forced their way across the borders in hope of entering the E.U. via Spain since these two cities are politically European despite not being on the continent.

Since then, the Spanish government has invested heavily in fortifying the EU’s southern most land frontiers (more than 30 million Euros, or approximately $41,238,000.)

In 2010, these two enclaves, both relying on resources from their immediate neighbor, Morocco, caused a political ruffling when the Moroccan government accused Spain of racism and boycotted produces going into the two Spanish territories.

What is the most direct effect of these European fortresses in Africa? Since the revamp of the fences, immigrants—many being refugees—have to cross into Europe via the Mediterranean, often in makeshift and unseaworthy boats.

The Arab Spring that sprung across North Africa and into the Levant unleashed waves of asylum seekers and refugees dire to get into the E.U. However, due to the difficulties of crossing into these two enclaves people have been going via the sea to reach another nearby EU territory—the Italian island of Lampedusa. These journeys frequently prove to be perilous.

A Syrian refugee and his family who had traveled through five countries with six forged passport across the Levant and North Africa hoping entering Europe via Melilla claims this European fortress is nothing less than an open-air prison.

Not only is the condition inside the refugee camp less than optimal, in February, Spain took the decision to close the border of Melilla after a group of around 200 to 300 Syrian refugees tried to enter.

After the Moroccan authorities warned the Spanish authorities of the presence of “uncontrolled people,” the gates of Europe quickly flung closed before these desperate people who found themselves stranded in Moroccan territory. Earlier in February, at least 12 people died outside of Ceuta’s fences; 23 others were handed to the Moroccan authorities to be returned to Syria, a human right violation and a contradiction of the terms laid out in the Convention for Refugees of 1951.

If the E.U. would like to live up to the terms set out in the Europe Convention on Human Rights of the Council of Europe and other treaties and conventions to which it and its member states are party, the unofficial Fortress Europe policies of its frontier member states must not continue. These policies are unjustifiable disregard of ongoing ordeals that many refugees are facing in their homeland as well as the value of their lives.