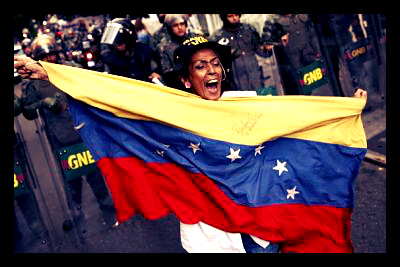 Venezuelans took to the streets to protest against the successor government of the late Hugo Chavez led by President Nicolas Maduro. The oil-rich Bolivarian Republic, many citizens feel, is failing to provide them with an adequate living standard. Inflation of the Venezuelan bolívar is going up at an astronomical rate, the highest in Latin America at 56 percent. Basic commodities as well as absolute necessities are scarce and the murder rates are getting higher.

Struggling with capital flight—a consequence of the currency’s devaluation—and the enormous loss of its foreign reserves, authorities have done little to try to salvage the bolívar.  The poor state of the Venezuelan economy has an acute impact on the country’s political climate. Not only have the left-wing party’s populist policies deeply polarized the society. This deep polarization in the society—already plagued with a gargantuan disparity gap—is manifesting itself on the streets of Caracas as both supporters and opponents of the current government are staging rival rallies.

With already four casualties at the hands of the authorities, the violent Venezuelan protests on the streets of Caracas are a direct result of years of accumulated policy mistakes and economic woes that Venezuelans have endured. Shortages of the most basic necessities such as toilet paper, rice, coffee and corn flour, the lastest of which is a crucial ingredient in the Venezuelan daily diet.

Years of over-reliance on imports, price controls, unsustainable petroleum money coupled with the lack of cash in general and the government’s obstinacy to not deliver United States dollars to importers have made many common and vital items to be absent from Venezuelan markets. Many industries that used to provide these basic resources for the country have also all been greatly diminished.

However, many Venezuelans still support their government. The populist regime created—arguably with the oil revenue—during Hugo Chavez’s administration has seen the power of the elite substantially curbed and the state’s roles exponentially expanded. The policies that follow the government’s egalitarian and anti-imperial discourse (which had caused an abrasive verbal duel between the King of Spain and the late Hugo Chavez) have generated a short-term but unsustainable well-being for the Venezuelan people.

However, the aforementioned price control, decreed wage raises, the notorious nationalization of foreign capitals (a measure taken by many Latin American governments of the same political camp as Venezuela,) the reduction of interest rate as well as the inorganic credit manipulation all contribute to the present hardship facing the people of Venezuela. However, it is because of these policies that so many people, especially those from the poorer sectors of the society, are still in favor of the government.

Thus, the student-led Venezuelan protests and the deadly clashes in Caracas is an archetypal manifestation of the political paradigm that is appearing across the developing world. It is a paradigm that presents a discourse that puts into question the very principles of democracy.

In places where there is wide disparity in terms of material development and education, should good governance take precedence over popular support? Is democracy a panacea for all malaises, a one size fits all model to which every society should aspire? These are not simply rhetorical questions; they are vexing dilemmas that will necessitate answers as Western hegemony yields.

Education in EthiopiaFortress Europe: Ceuta and Melilla
Scroll to top