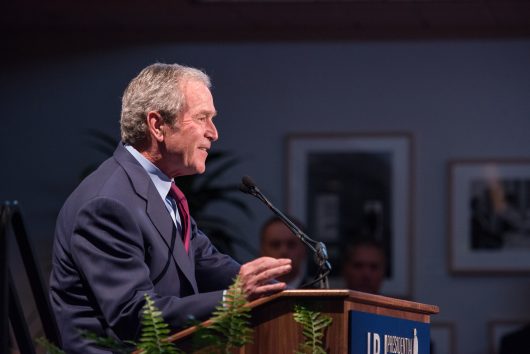 All five living former presidents met in Texas on October 22, 2017, the first gathering of all past U.S. leaders since 2013. Their mission was to raise funds for hurricane victims in Florida, Texas, the U.S. Virgin Islands and Puerto Rico. The event, titled “Deep from the Heart: One America Appeal,” accumulated $31 million towards helping those in need. The former U.S. presidents fight global poverty because they consider the issue too vital to ignore even in retirement.

Even at age 93, Jimmy Carter works alongside other volunteers outdoors to build houses with Habitat for Humanity. Both Carter and his wife Rosalynn have traveled around the world to raise awareness towards the benefits of affordable housing. Their work encompasses 14 countries and 4,000 built homes.

Both George H.W. Bush and Bill Clinton fought a vicious campaign against each other for the presidency in 1992. But all wounds were mended by 2005, when the two former presidents visited Asia to raise money in the wake of a deadly tsunami. The two men also raised more than $100 million to support the victims of Hurricane Katrina.

On the subject of losing the re-election to a member of an opposing party, H.W. Bush commented, “You just can’t go through life with a great deal of bitterness in your heart over something that happened 15 years ago.”

In addition to the funds raised after Hurricane Katrina, Clinton established the Clinton Global Initiative (CGI) in 2005. The CGI gathered Nobel laureates, leading CEOs, philanthropists and more than 200 former heads of state to create Commitments to Action for those in need.

Previous Commitments to Action include an amount of refugees taken in by a country, an installation of solar arrays for a country and advice from major corporations to a country. CGI has aided 180 nations since its genesis.

October wasn’t the first time the world saw George W. Bush and former U.S. presidents fight global poverty together. Both Bush and Clinton raised funds to provide for Haiti in the wake of the 2010 earthquake.

Bush continued his philanthropy even after his two terms saw the achievement of the U.N.’s Millennium Development Goals years ahead of schedule.

Not even a year after leaving office, Barack Obama advocated for the world to address climate change, poverty and disease. “People wildly overestimate what we spend on foreign aid,” he said, “…It’s a good investment to make countries work.” Obama joined philanthropists Bill and Melinda Gates, Leymah Gbowee and Canadian Prime Minister Justin Trudeau to urge nations in uniting to combat global poverty.

Seeing all former U.S. presidents fight global poverty reveals the tenacity within each leader. All five men, however, believe that saving the world is a global effort.